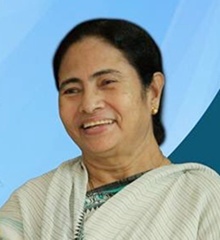 Bengal chief minister Mamata Banerjee who propelled herself to power on the Singur land acquisition row secured yet another win today with the Supreme Court quashing the land acquisition by the Buddhadeb Bhattacharya-led CPM government in 2006.

The court held that the acquisition of the land in Singur for allotting it to the Tata Group for setting up a plant for its Nano car, could not be said to be for a ''public purpose'' and directed the state government to remit the land back to the farmers within 12 weeks.

The court also held that farmers who got compensation from the government will not return it because they were deprived of their livelihood for the last ten years.

The court order signifies a major victory for Mamta Banerjee and the TMC, which had led the protest against allocation of land for the Tata factory.

Mamata Banerjee hailed the Supreme Court's verdict and said she was happy for this grand success after 10 long years. ''Now I can die in piece,'' Mamata Banerjee said in a brief statement to the media.

The West Bengal under the earlier Left Front government had allocated 1,000 acres of land, acquired mostly from small-time farmers in Singur, to Tata Motors   for the company's aborted project to start a Nano car plant, in 2006.