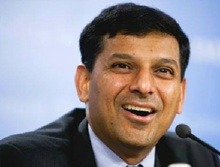 Weak capital formation caused by a drop in investment has been a key factor behind India's struggle to realise its growth potential and with factories running 30 per cent below capacity, private companies are in little rush to make fresh investments, Reserve Bank governor Raghuram Rajan said today.

"On the growth front, the central concern is with investments," said Rajan, who was speaking at a business event in Hong Kong. "Private investment has fallen back a bit and so has public investment."

Rajan, however, said the redeeming factors are the strong foreign direct investment and some traction in infrastructure development that could encourage private investments.

The RBI has cut its growth forecast for the current fiscal year to 7.4 per cent from the previously estimated 7.6 per cent, well below the government's target of 8 to 8.5 per cent.

RBI cut the benchmark policy rate by a half percentage point to 6.75 per cent in September, after months of pleading by government leaders and industrial groups for more stimulus to stoke growth.

''I would doubt this (low-growth) is a twenty-year phenomenon and I think we should be coming out of it,'' Rajan said, but he warned against piling up debt to boost growth.

Rajan, who has been against the policy of monetary easing to leverage the global financial system has all the while been warning against the dangers of cheap money policy.

''We should be careful of creating an environment that leads to a significant creation of debt.''

However, he said, the global economy isn't likely to remain in a long period of sub-par growth.