More reports on: In the news, Trade

US can be India's best partner, says Obama at end of visit

Visiting US President Barak Obama, who left for Saudi Arabia, on Tuesday left his audience enthralled, from a stylish namaste to an attempt to quote a well-known line from a Shah Rukh Khan blockbuster. 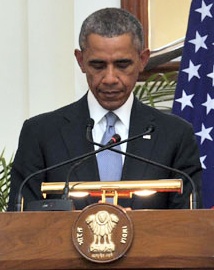 Recalling the historic address of Swami Vivekananda in the US, Obama won over his audience today by referring to them as "sisters and brothers of India" and said he firmly believes America can be India's "best partner" and together the two nations can bring more prosperity to their people.

In his final engagement in India, before flying to Riyadh and then home, the US President addressed a town hall-style meeting in Siri Fort auditorium, where he said, "India and the US are not just natural partners, I believe that America can be India's best partner, I believe that."

Addressing an invited gathering of young people, civil society and diplomats, the US President reached out to the audience with many Hindi words like Namaste, Dhanyavad and even some references to Bollywood films, which had the crowd ecstatic.

He said he was "absolutely convinced" that when both the democracies stand together they can produce more jobs, opportunities and prosperity for their people. "I believe that," he said.

He said America wants to be a partner as "you lift up the lives of the Indian people and provide greater opportunity".

"In recent years India has lifted more people out of poverty than any other country and now we have a historic opportunity with India leading the way to end the injustice of extreme poverty all around the world," he said.

Obama said America wants to be a partner in igniting the next wave of Indian growth.

"As India pursues more trade and investment we want to be first in line. We are ready to join you in building new infrastructures, the roads, airports the ports, the bullet trains to propel India into the future. We are ready to help designs more cities which serve citizens better," he said.

Recalling the historic address of Swami Vivekananda, Obama began his town hall meeting with the invocation "sisters and brothers of India" and talked about how the philosopher-sage introduced Hinduism and yoga to America in a city that was his hometown.

He recalled Swami Vivekananda and his famous speech in Chicago, exactly 100 years ago, where he addressed the gathering as "sisters and brothers of America" and said he was going to address the audience likewise.

Obama said he was very impressed with the daredevilry of the Army's motorcycle contingent riding Royal Enfield bikes and wished he could ride a bike too.

"But the Secret Service does not let me ride motorcycles," he said, and also remarked that he cannot dance as well as his wife Michelle.

In a speech where he touched on the need for India and the US to work together on climate change, on how the US can partner India in its growth story, in defence cooperation and becoming partners in the security of the Asia-Pacific region, the American President also stressed on the need for the government to uphold the freedom of religion written in the Constitution of both the countries.

He also spoke of the civil nuclear deal that both countries are pushing ahead with, saying it would help bring electricity to homes in India and more clean energy.

He said the US wants to partner India in its infrastructure push, building ports, bullet trains, smart cities and "develop technology that we do with closest allies" and also touched on cooperation in tackling terrorism.

Recalling his own experience as a minority community member in the US, Obama said that while he has had extraordinary opportunities, "there were moments in my life where I've been treated differently because of the colour of my skin".

He also referred to the persistent false rumours that he is a Muslim, not a Christian.

"There have been times where my faith has at times been questioned by people who don't know me, or they've said that I adhere to a different religion, as if that were somehow a bad thing," Obama said.

"The peace we seek in world begins in human heart," he added.

Obama recounted an incident that occurred three years ago in Wisconsin where a man went into a Sikh gurudwara and "in a terrible act of violence" killed six innocent people which included both American and Indians.

"In that moment of shared grief, the two countries reaffirmed the basic truth that we must again today. Every person has a right to practice the faith that they choose and to practice no faith at all and to do so free of persecution, fear or discrimination," he said.

On Indo-US relations, Obama said, "India and the United States are not just natural partners - I believe that America can be India's best partner."

"Of course, only Indians can decide India's role in the world," he said, adding, "But I'm here because I am absolutely convinced that both our peoples will have more jobs and opportunity, our nations will be more secure, and the world will be a safer and more just place when our two democracies stand together."

Obama also said the US supported India's inclusion as a permanent member in the UN Security Council.

Against the backdrop of China exerting its influence in South China Sea, Obama said freedom of navigation must be upheld in the Asia Pacific and welcomed a greater role for India.

"The United States welcomes a greater role for India in the Asia Pacific, where the freedom of navigation must be upheld and disputes must be resolved peacefully," he said.

He spoke of his own humble roots, which he said were in many ways similar to the roots of the Indian prime minister.

"If the grandson of a cook can become president, and the tea seller can become the prime minister, so can young people from the humblest of origins dare to dream big and realise their aspirations," he said to loud cheers and applause.

He also talked about the importance of women in society and said a "nation is successful when its women are successful", a remark which again drew strong applause.

He talked about how impressed he was with the "incredible women in (India's) armed forces" that he witnessed at the Republic Day parade Monday and also mentioned about the women officer - Wing Commander Pooja Thakur of the Indian Air Force - who led the guard of honour at Rashtrapati Bhavan at his official welcoming ceremony on January 25.

He also stressed the right to freedom of individuals to profess, practice and propagate religion and said it was important for India with its multiplicity of faith to uphold this fundamental right.

A special radio programme featuring Obama and Narendra Modi was aired on Tuesday night, devoid of any hard issues like politics and foreign affairs but focussed on social issues and personal matters related to the two leaders.

The programme was virtually conducted by Modi, who read out the questions received from various parts of the country and both the leaders answered them (See: Mann Ki Baat – Modi, Obama jointly air views over the radio).