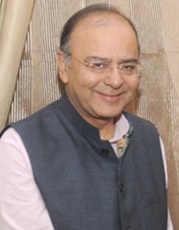 The government is looking at overhauling tax administration and easing land acquisition procedures, so as to boost investment and revitalise the economy, finance minister Arun Jaitley said on Sunday.

He said the government is in the final stages of talks with the states on the goods and services tax (GST) before the relevant bill for implementation is introduced in the upcoming session of Parliament.

''I'm in the last stages of my discussion with the states on the eve of Parliament session, before introducing the amendments to the GST law in Parliament,'' Jaitley said at the India Global Forum meet, hosted by the International Institute for Strategic Studies.

The finance minister said the first tranche of compensation to states to make up for their revenue loss from the phasing out of Central Sales Tax (CST) may also be taken up in the upcoming session of parliament.

States have sought a five-year compensation package and asked for its inclusion in the GST bill. Legislation on the GST has been stuck on the compensation issue despite a Constitution Amendment Bill in the Lok Sabha for introduction of the GST by the previous UPA government in 2011

However, hard line states like Gujarat, Madhya Pradesh and Uttar Pradesh, which were earlier standing in the way of GST, have now eased their stance although they still insist on addressing their concerns over revenue loss.

Jaitley has assured Parliament that the government will seek to move the amendments this year itself, besides assuring states that he would clear their compensation dues of about Rs34,000 crore over a three-year period.

The minister also said that changes are needed to existing legislation to speed up the process of buying land for industrial use, which is now a contentious issue causing long delays in implementation of projects.

"Some changes may be necessary (to the Land Acquisition Act)," Jaitley said at an economic forum in New Delhi.

"We will first try to reach a consensus and if that is not possible we will go ahead and take the decision," he said.

The BJP government has been cautiously moving ahead with small doses of reforms from the beginning despite criticism that the Modi government, like its predecessor,too, lacks the boldness needed to eliminate regulatory hurdles to doing business in India.

Land acquisition, which is both a political and an ecologically-sensitive issue, has delayed several major projects, including the $12-billion steel project of South Korean steel giant POSCO in Odisha.

Industry also says the law, passed last year by the previous Congress government, which seeks to compensate farmers and tribals who sell their land for industrial projects, has made the task of land acquisition more difficult for them.

However, changes in the land acquisition laws would require the support of opposition Congress at least in the upper house where the ruling Bharatiya Janata Party lacks a majority.