Its economic prowess notwithstanding, India ranked among the bottom five countries with the lowest public health spending globally according to a report by Accenture. 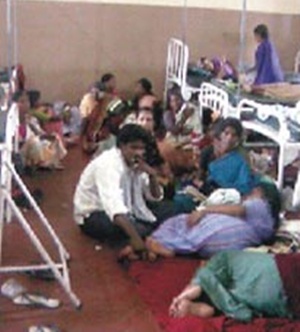 The report, Delivering e-health in India - Analysis and Recommendations, pointed out that the Indian healthcare system continued to be plagued by underfunding and poor governance, which had led to significant inequities in providing basic healthcare.

The system had evolved over the past 50-60 years in the country, but the service levels remain inadequate. Moreover, India  invested less public money in health than most comparable countries, despite the high cost of healthcare.

According to the report, substantial gaps in healthcare infrastructure, low healthcare insurance service coverage and inadequate medical manpower were the major challenges hampering growth in the healthcare sector.

According to Krishna Giri, vice-chairman, health and public services, Accenture in India, the report identified the importance of shifting from 'infrastructure focus to productivity focuses' for improvements in India's healthcare access. This could be achieved only if larger fund allocation for healthcare was accompanied by effective and innovative interventions to improve the system to achieve global standards.

Giri, who was in Kochi in connection with a national e-governance conference, told Business Line that comprehensive adoption of IT and digitisation of systems to improve access to these services was central to improving the productivity of the overall healthcare system.

While India's healthcare expenditure had risen in the past and the government planned to increase funding to nearly 2.5 per cent of the GDP in the 12th five year plan, India's investment in health stood much lower than most comparable countries, pharmabiz.com said. It added, India's overall health spending did reach 6 per cent of the GDP but most of that was private money, it said.

Hospital bed density in India had stagnated at 0.9 per 1000 population since 2005 and fell significantly short of WHO laid guidelines of 3.511 per 1000 patients' population. Further, there was a huge inequity in utilisation of facilities at the village, district and state levels with state level facilities remaining the most strained.

Low healthcare insurance service coverage led to high levels of out of pocket spending, with close to 80 per cent of spend in India being out-of pocket, primarily due to extremely limited insurance coverage, both personal and government funded.

Research had pointed out that the proportion of medical and healthcare expenditure in overall personal consumption had increased considerably over the years, according to the report.