The Supreme Court today directed the Election Commission to frame guidelines for regulating contents of manifestos that promise "freebies" to voters. 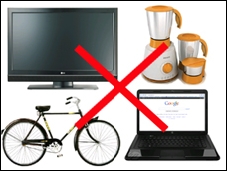 A bench of justices P Sathasivam and Ranjan Gogoi said such freebies promised by political parties in their election manifestos shake the roots of free and fair polls.

He had conteded that freebies offered by the Tamil Nadu government amounted to bribing the voters, besides being a huge drain on the state exchequer.

The judges said these promises by political parties disturb the level playing field among various parties contesting the polls and vitiates the election process.

The bench said though the election manifesto is published before the code of conduct comes into force, the Commission could make an exception by bringing it within its code of conduct.

"There is no guideline for regulating the contents of election manifesto. We direct the Election Commission to frame guidelines on it," the judges directed.

"We direct election commission to take up the task (of framing guidelines) immediately," it said.

The apex court also said that separate legislation on this issue was required.

The bench, however, dismissed Balaji's petitions saying that under the present law, promises of freebies made in the manifesto do not amount to corrupt practices.