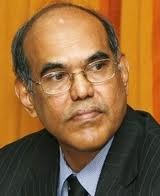 The Reserve Bank of India today cut the cash reserve ratio by 25 basis points or 2.5 per cent as was expected, especially after the broad hints dropped by finance minister P Chidambaram to this effect. However, it left interest rates unchanged.

The CRR thus stands at 4.25 per cent now, while the repo rate (at which banks borrow from RBI) remains unchanged at 8 per cent.

The central bank also indicated that it may ease monetary policy further in its March quarter review, although it said inflation remains a near-term concern.

"As inflation eases further, there will be an opportunity for monetary policy to act in conjunction with fiscal and other measures to mitigate the growth risks and take the economy to a sustained higher growth trajectory," RBI governor Duvvuri Subbarao wrote in his quarterly policy review.

On Monday, Chidambaram had unveiled a five-year road map for fiscal consolidation to promote investments, contain inflation and reduce fiscal deficit. He said the government will continue its efforts to restrict fiscal deficit in the current financial year to 5.3 per cent of GDP and reduce it to 3 per cent by 2016-17.

The cut in CRR is expected to inject Rs17,500-crore more liquidity into the banking system.