A series of major reforms undertaken over the past year will allow real GDP growth to reach 6.75 per cent this fiscal and will rise to 7.0 to 7.5 per cent in 2018-19, thereby re-instating India as the world's fastest growing major economy, says the economic survey presented in Parliament by finance minister Arun Jaitley. 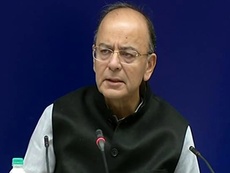 The survey underlines that due to the launch of the Goods and Services Tax (GST) that came into effect from 1 July, 2017, resolution of the long-festering ''twin balance sheet'' (TBS) problem by sending the major stressed companies for resolution under the new Indian Bankruptcy Code, implementing a major recapitalisation package to strengthen the public sector banks, further liberalisation of FDI and the export uplift from the global recovery, the economy began to accelerate in the second half of the year and can clock 6.75 per cent growth this year.

The survey points out that according to the quarterly estimates; there was a reversal of the declining trend of GDP growth in the second quarter of 2017-18, led by the industry sector. The Gross Value Added (GVA) at constant basic prices is expected to grow at the rate of 6.1 per cent in 2017-18 as compared to 6.6 per cent in 2016-17.

Similarly, agriculture, industry and services sectors are expected to grow at the rate of 2.1 per cent, 4.4 per cent, and 8.3 per cent respectively in 2017-18. The survey adds that after remaining in negative territory for a couple of years, growth of exports rebounded into positive one during 2016-17 and expected to grow faster in 2017-18.

However, due to higher expected increase in imports, net exports of goods and services are slated to decline in 2017-18. Similarly, despite the robust economic growth, the savings and investment as a ratio of GDP generally declined. The major reduction in investment rate occurred in 2013-14, although it declined in 2015-16 too. Within this the share of household sector declined, while that of private corporate sector increased.

It points out that the GDP growth has averaged 7.3 per cent for the period from 2014-15 to 2017-18, which is the highest among the major economies of the world. That this growth has been achieved in a milieu of lower inflation, improved current account balance and notable reduction in the fiscal deficit to GDP ratio makes it all the more creditable.

''Though concerns have been expressed about growing protectionist tendencies in some countries but it remains to be seen as to how the situation unfolds,'' it notes. Some of the factors could have dampening effect on GDP growth in the coming year such as the possibility of an increase in crude oil prices in the international market. However, with world growth likely to witness moderate improvement in 2018, expectation of greater stability in GST, likely recovery in investment levels, and ongoing structural reforms, among others, should be supporting higher growth. On balance, country's economic performance should witness an improvement in 2018-19.

The survey highlights that against the emerging macroeconomic concerns, policy vigilance will be necessary in the coming year, especially if high international oil prices persist or elevated stock prices correct sharply, provoking a sudden stall? in capital flows. The agenda for the next year consequently remains full: stabilizing the GST, completing the  TBS (twin balance sheet) actions,  privatising Air India, and staving off threats to macro-economic stability.

The TBS actions, noteworthy for cracking the long-standing ? exit? problem, need complementary reforms to shrink unviable banks and allow greater private sector participation. The GST Council offers a model ? technology? of cooperative federalism to apply to many other policy reforms.

Above all, India must continue improving the climate for rapid economic growth on the strength of the only two truly sustainable engines-private investment and exports.