Marissa Mayer, others to quit Yahoo after it becomes 'Altaba' 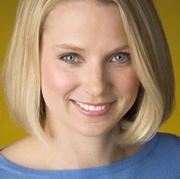 Yahoo chief executive officer Marissa Mayer, co-founder David Filo and others plan to resign from the company's board when it completes its $4.8 billion sale to Verizon.

The high-profile Mayer, who was brought in to save the internet icon in 2012; Filo, who co-founded the company at Stanford University in 1994; board chairman Maynard Webb; and three others are departing. It is widely believed, however, that Mayer will remain in an advisory capacity.

Eric Brandt, a new member of Yahoo's 11-member board, was named chairman immediately.

In a Securities and Exchange Commission filing late on Monday, Yahoo said the resignations are "not due to any disagreement with the company on any matter relating to the company's operations, policies or practices".

The filing also said the company would be renamed Altaba after the Verizon deal closes.

Mayer's absence from the new company's board is not surprising at all, said Gil Luria, managing director for equities research at Wedbush Securities in Los Angeles.

''Altaba will not be an operating company and therefore there is very little for her to be involved in,'' he told USA Today.

Luria theorised that Altaba, whose value is mostly made up of Yahoo's Alibaba stake, will likely be unwound over time by selling the Alibaba and Yahoo Japan stakes to investors.

''The only consideration slowing that sale down would be tax consequences to shareholders who have seen the Alibaba stake appreciate considerably since Yahoo bought the stake,'' he said.

The Yahoo-Verizon deal has been star-crossed since it was announced in July 2016.

Last week, a senior Verizon executive who was instrumental in the telecom company's planned purchase of Yahoo's internet business, expressed doubts over the deal, the second top exec to raise the spectre of a changed or abandoned takeover.

"I can't sit here today and say with confidence one way or another because we still don't know," Marni Walden, president of product innovation and new businesses at Verizon, said when asked about determining whether the deal gets done. She did, however, tell attendees at an investment bank conference in Las Vegas that the deal made sense.

Verizon execs have been unsettled by two disclosed digital breaches by Yahoo that have affected more than 1 billion of its members dating back several years.

Yahoo, a pioneer in the internet space, has also struggled to land digital advertising in the face of withering competition from larger rivals Google and Facebook.