A new ad by Procter & Gamble's cosmetics brand Pantene, best-known for its hair care products, has raised a considerable debate in the US about whether women apologise too much. 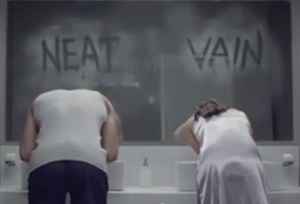 This 1 minute commercial does a powerful job of pointing out the way that women are disadvantaged in corporate contexts.  The men and women in the ad are portrayed similarly, but the women are judged for the actions while the men are praised

The ad, dubbed ''Not Sorry,'' shows women apologising in the office, at home and even in bed, with one woman apologising to her partner while pulling up the covers.

''Universally, every woman that sees the video is like, 'Oh, my gosh. I do this all the time and I don't even know it,'' Pantene spokeswoman Cheri McMaster told ABC News.

After the apologies, the ad shifts gears to show women who are strong and taking control, with some of the women saying, ''Sorry, not sorry.''

Experts say that the simple five letter word at the heart of the commercial - sorry - can have a big impact on the way a woman is perceived.

''Women have more connectivity between the left brain and the right brain and because of that we're more emotional and more sensitive to how other people are feeling,'' Tonya Reiman, author of ''The Power of Body Language," told ABC News. ''Therefore we feel like we need to apologize for everything.

This can perhaps be written off as media speak, particularly as the most recent neurological studies have shown that the supposed difference between 'left brain' and 'right brain' thinking has been overestimated.

The ad's empowering message is part of Pantene's 'Shine Strong' campaign and the newly launched Pantene Shine Strong Fund that will underwrite grants and give women access to influential leaders to ''enable women to be strong and shine,'' according to the company.

This ad, combined with Pantene's commercial last year – ''Labels Against Women'' – that highlighted workplace stereotypes, is the latest in a series of eye-catching and pot-stirring ad campaigns geared toward women.

Dove's ''Real Beauty'' campaign went viral last year after it showed the differences in how women view themselves versus how others view them by engaging a sketch artist.

''It's been proven in the past year that talking about sexism and feminism and female empowerment is a great way for brands to build buzz,'' AdWeek writer Emma Bazilian said. And for Western democracies, this is the crux of the issue.

The same ad is unlikely to work in South Asian countries like India, however. The 'glass ceiling' here is very low, and the women who break through are more likely to be less apologetic.