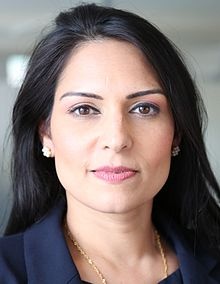 It emerged that Patel failed to disclose some of her meetings with Israeli officials through proper procedures, which made her position in the cabinet untenable.

Patel tendered an apology for her actions, saying these "fell below the standards of transparency and openness that I have promoted and advocated".

It was alleged that Patel held nearly a dozen undisclosed meetings with Israeli officials, including Prime Minister Benjamin Netanyahu.

Secretary of State for International Development Priti Patel said, ''This summer I travelled to Israel, on a family holiday paid for myself.

''While away I had the opportunity to meet a number of people and organisations. I am publishing a list of who I met.? The Foreign and Commonwealth Office was aware of my visit while it was underway?.

''In hindsight, I can see how my enthusiasm to engage in this way could be misread, and how meetings were set up and reported in a way which did not accord with the usual procedures. I am sorry for this and I apologise for it.

''My first and only aim as the Secretary of State for International Development is to put the interests of British taxpayers and the world's poor at the front of our development work.''

The UK minister visited Israel on a family holiday from 13 to 25 August 2017. She paid for it herself.

While on holiday, Patel met a number of people and organisations, including politicians, business leaders, tech start ups and NGOs.

The meetings were arranged by the Conservative Peer Lord Polak CBE. He also attended the meetings, with the exception of the meeting with Dr Aliza Inbal.

These meetings were an opportunity to learn about the Israeli approach to technology and development.

The FCO were aware of the visit while it was underway, but were not informed about it in advance.

On her return from Israel, the secretary of state commissioned departmental work on humanitarian and development partnership between Israel and the UK, and on disability.

While these meetings and interactions in no way damaged British interests, it was clarified that the procedures she followed were incorrect.

The Secretary of State regretted the lack of precision in the wording she used in her statements, even as she clarified her position in her apology.

Preti Patel's parents had fled Uganda in the 1970s and migrated to the UK where she grew up in an area with a thriving Jewish community.

Her Indian background and familiarity with the Israeli political scene increased the prospects for closer collaboration between Israel and the UK on development and humanitarian issues.

During her vacation in Israel, she met Israeli foreign minister Yuval Rotem and discussed Israel's approach to development and humanitarian issues, and prospects for partnership work between Israel and the UK on development and humanitarian issues. In the process, the Israeli foreign ministry also got an idea of her political and social background.

The secretary of state also held discussions with Israeli minister for public security, information and strategic affairs Gilad Erdan on British politics, growing anti-Semitism within the British political scene, and a cultural festival in London.

During a meeting with Yair Lapid, leader of Yesh Atid, she talked about her background, families and careers to date while discussing British politics, including the growing anti-Semitism within UK politics in general.

With IsraAID, an emergency humanitarian aid NGO, she discussed their work, at the home of Hilda Worth.

Mitrelli Group's Haim Taib made a presentation on their work, on water, farming, solar and hospital projects in Africa.

During her visit to Save a Child's Heart hospital, she met children and their families from Gaza and Africa who had been given life-saving heart surgery.

She also met Dr Hirschfeld, Shimon Hefetz of Galilee International Management Institute where she was informed of their work.

The secretary of state also met a group of startups with a focus on Africa, which included Vital Capital, MobileODT, Equatel Health, Cassit Orthopedics, Ltd, NUFiltration Ltd, Fair Planet. She was introduced to new technologies for development like mobile cancer screening, water filtration, splints and supports for people with disabilities.

The 45-year-old Gujarati-origin MP, often touted as a potential future leader of the Conservative party and a prime ministerial material, had a meteoric rise and an abrupt end.

Preti Patel was elected as a Conservative MP for Witham in Essex in 2010 and gained prominence in the then David Cameron-led Tory government as his 'Indian Diaspora Champion'.

She was appointed to junior ministerial posts and then as treasury minister in 2014, and as employment minister after the 2015 general election, before May promoted her to secretary of state in the department for international development (DfID) last year.

Patel is also among the most vocal supporters of Brexit and had steered the 'Vote Leave' campaign in the lead up to the June 2016 referendum in favour of Britain's exit from the European Union (EU).