At 13, Tanmay Bakshi is a full-fledged IBM Watson programmer and one of the youngest app developers in the world today, and coding is his passion. 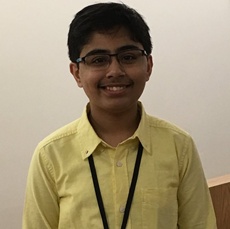 Tanmay, who was first drawn to programming languages when he was just five and was wondering how his name could be displayed on his dad's computer screen, now lectures to computer experts on big data analytics.

Tanmay, who lives in Brampton, Canada, built his first app for the iPhone when he was only nine years old. But success and recognition did not come that easy for the whizkid. He got his first app published on the app store on Valentine's Day 2013 after many rejections.

Recently, delivering the keynote address at Nasscom's Big Data and Analytics Summit, Tanmay told a crowd of computer programming experts about his quest to solve simple mysteries that intrigued him and how he started programming with his father's help.

Tanmay, who made global headlines for his prowess in coding, IBM Watson and artificial intelligence, wowed the packed crowd with his knowledge of the subject.

When every other child was making his/her way through first grade, Tanmay Bakshi was a programming prodigy.

He learned computer programming out of his passion for fun and games at the tender age of five. ''Computers just fascinated me with how they could do anything. They were like magic,'' Bakshi told Quartz in an interview. ''Just seeing my name on the screen or just seeing the color of the screen change, it was really fascinating. I wanted to know what went behind it and how it actually worked.''

''At five, everything was like a toy for me. I didn't know that people did programming as a job, that people were paid to do this,'' he said. ''My dad [also a programmer by profession] was able to see that curiosity and was able to help me nurture that passion,'' Bakshi said. He started off with programming in simple languages like FoxPro, Bash, and VB (Visual Basic).

Bakshi designed his first major application when he was eight. By age nine, he had released his first iOS app, called 'tTables,' that helped kids learn multiplication tables. At 12, Bakshi became IBM Watson's youngest programmer, even detecting a bug in the system. (Since then, IBM has invited Bakshi to conduct a main-stage session at its annual conference, and he continues to work under mentors at the company.)

Now, the 13-year-old is also an author and a teacher.

In 2011, Bakshi launched YouTube videos-Tanmay Teaches-designed to teach budding coders the tricks of the trade. ''I started it with a goal, which was to help and reach out to 100,000 aspiring coders and beginners to help them along their journey of learning programming,'' said Bakshi. ''I've reached around the 3,900 mark there.'' He has also authored a book titled ''Hello Swift,'' a beginners' guide for iOS app developers.

His busy schedule, however, makes normal schooling difficult for the Ontario, Canada, resident, and for the past two and a half years, Bakshi has been homeschooled.

When he's not coding, creating YouTube tutorials, or serving as a keynote speaker for the likes of Apple, Walmart, IBM-and soon, India's IT industry association Nasscom - he enjoys biking and playing table tennis.

Bakshi is also currently working on a project, `The Cognitive Story,' through which he hopes to help a quadriplegic woman communicate.