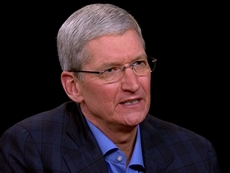 Cook's first visit to India since taking over as CEO in 2011, following a trip to China (his eighth since 2011), comes at a crucial time as Apple looks for new growth markets after posting its first ever decline in iPhone sales, and after India denied it permission to sell refurbished used phones in the country (See: India rejects Apple bid to sell used iPhones in market).

It was not immediately clear whether Cook would discuss importing refurbished iPhones with officials in New Delhi. Unconfirmed reports say Cook would also visit Bengaluru, announce a new distribution strategy in India, and launch an accelerator for start-ups.

India would be particularly keen to know if Apple has plans to set up production facilities in the country, which would be a boost for Modi's ''Make in India'' manufacturing push.

Maharashtra is already in talks with Apple product maker Foxconn Technology over it setting up an iPhone plant there.

Apart from meeting Modi, Cook will also meet employees and partners, according to a Reuters report citing sources. Apple declined to provide details of Cook's schedule in India.

His visit comes at a time when Apple is facing some challenges in its most important overseas market China, including weakening smartphone sales, the loss of an iPhone trademark dispute and the suspension of some of its online entertainment services.

In India, Apple is looking to set up its first retail outlet, as it only has about a 2 per cent market share. But its sales in India surged 56 per cent in the first three months of this year, driven mainly by cheaper older-generation devices such as the iPhone 5S.

More than 100 million smartphones were sold in India last year and the market is expected to grow by 25 per cent this year, making the country one of the fastest growing smartphone markets in the world.

Cook is visiting China and India after announcing a $1 billion investment in Chinese ride-hailing app Didi Chuxing, a move that could provide a shot in the arm for Indian unicorn Ola, which counts Didi as a strategic investor, in its market share battle with rival Uber.

In December, Ola, Didi and two other international cab-hailing services, US-based Lyft and Singapore-based?GrabTaxi, entered a global ride-share agreement to take on common enemy Uber, the most valuable internet start-up that wants to dominate urban transportation across the world.

Ola raised some $500 million from Didi, SoftBank Group and others in November.