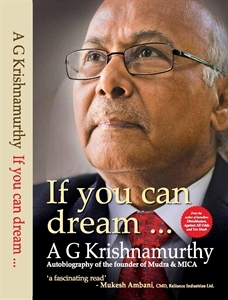 AG Krishnamurthy, a doyen in the advertising world who founded Mudra Communications, and the Mudra Institute of Communications (Mica), Ahmedabad, passed away in Hyderabad on Friday. He was 73.

'AGK', as he was fondly known, is survived by his wife, three daughters and a son. He was hospitalised about a week ago. He died in the morning and the funeral was held in the afternoon, according to his son A Kalyan.

"AGK was a wonderful human being and I am not saying this because I do not wish to sound rude. I mean it," said Arun Nanda, chairman & managing director, Rediffusion Y&R,.

An unassuming man, Krishnamurthy remained friends with Nanda and many more across the advertising spectrum long after he had bid adieu in 2003. Such was his passion for the business, say those who remember him.

His beginnings were humble. He was born in a small town called Vinukonda in Guntur district of Andhra Pradesh, studying history and eventually taking a job in a textile mill, before moving to advertising in the 1970s. He remained agile, incisive and alert to all ad developments till the very end.

His lasting legacy remains the Indian stamp he brought to advertising, ahead of flag-bearers such as Piyush Pandey of Ogilvy & Mather. "Kamlesh Pandey of Rediffusion was the first one to introduce the Hindi idiom to Indian advertising. This was in the 1970s. AGK took it forward in the 1980s, reflected in the name and logo of the agency he founded, the posture of two hands in a mudra, the agency's brand identity, to the work he did for clients such as Vimal and Rasna. The Indian ethos was visible all over," Nanda says.

Krishnamurthy founded Mudra Communications with Rs35,000 in Ahmedabad, his favourite city, in 1980. By 1989, the agency had emerged the third largest, after the likes of HTA (now J Walter Thompson) and Lintas (now Mullen Lowe). Today, Mudra is part of Omnicom's DDB Group, a relationship that began in 1988 when DDB Needham bought an eight per cent stake in the agency. This was subsequently increased to 10 per cent and to 51 per cent in 2011.

"When I started Mudra, it was not just a full-time job; it became my mission in life," AGK would say.

For a man who shunned the limelight, his entry into advertising was dramatic. He was given the job to produce "the best possible advertising in textiles" for Reliance's in-house fabric brand, Vimal, when Reliance Group chairman Dhirubhai Ambani would trust no one else to do it.

Madhukar Kamath, chief executive officer & managing director at DDB Mudra Group, says, "Frank Simoes (an Indian ad legend) was handling the advertising for Vimal and Raymonds in the 1970s. It was conflicting business and sooner or later, Simoes would have to give up one of them.  He called up AGK and Dhirubhai one day, saying he could no longer handle Vimal; he was going with Raymonds."

Simoes' loss was Krishnamurthy's gain. Mudra began with the entire textile business of Reliance, subsequently picking up ad accounts of other Gujarat-based entrepreneurs. In Mumbai, Mudra bagged Godrej Industries, thanks to Sam Balsara, then part of the agency (he quit in 1988). Mudra Videotech, a precursor to today's production houses, was formed in the 1980s and co-produced serials such as Rajni and Buniyaad.

By the 1990s, Mudra was scouting for business across the country. Kamath, who had two stints in Mudra, between 1988 and 1999 and then from 2003 to now, was heading the Delhi office.

Krishnamurthy didn't stop at managing his agency. He launched the Mudra Institute of Communications (MICA) in 1991, in Ahmedabad, then the only one of its kind.

The new millenium saw Krishnamurthy nearing retirement but the man had built an edifice. His passing away comes when Mica celebrates its silver jubilee.