Steve Jobs, the co-founder of Apple Inc who has become iconic in US business for turning the company around when it was in its death throes, will get the accolade of a commemorative stamp with his image from the US Postal Service. 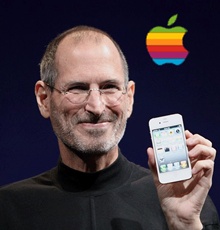 Stamp subjects are normally kept secret until just before printing, but The Washington Post says it has obtained a document outing approved stamps for the next few years. Only four years after his death, the Jobs stamp is already in design development for 2015, along with stamps for music legends Elvis Presley and James Brown, according to the paper.

The choice of Jobs appears a little ironic, as the technology whiz probably didn't send much 'snail mail' – at least in his later years.

The document from the US Postal Service's Citizens' Stamp Advisory Committee names "approved subjects" and says that design work on most of them has already begun. But a USPS spokesman told CNN that the list, dated 7 January, is still subject to change.

The new subjects are part of an effort by the cash-strapped postal agency to raise revenues by issuing more stamps of pop-culture figures, which are popular with collectors.

In November, the USPS released 20 postage stamps honouring – of all things – the fictional young wizard Harry Potter, the creation of writer J K Rowling, whom literature lovers look down upon.

US stamps typically honour only Americans, but the USPS has begun making exceptions, such as its 2010 stamp celebrating Kolkata-based humanitarian Mother Teresa.