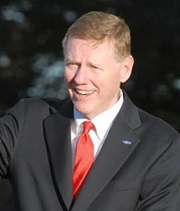 Scorching speculation that he could be in the race to succeed Microsoft's Steve Ballmer, Ford Motor CEO Alan Mullaly has said he plans to stay on at Ford.

Mulally told the Associated Press that he would stay at the car company until at least the end of 2014.

However, commentators say this did not entirely rule him out for the role of Microsoft CEO, though it did make him an unlikely short-term prospect.

"I would like to end the Microsoft speculation because I have no other plans to do anything other than serve Ford," Mulally said in an interview. "You don't have to worry about me leaving."

Mullaly's decision will lift the cloud of uncertainty that had been holding back shares of Ford in recent months as this year Ford plans to roll out 23 all-new models around the world, which would be a new one-year record for the automaker.

The surge in models would set the stage for increasing sales in 2015, especially in the US and China, which is rapidly emerging as the second most important market in the world for Ford. The company sold 935,813 vehicles in China, last year, up from 155,404 eight years ago when Mulally became CEO and the company.

With Mulally out of the race to succeed Steve Ballmer, other likely candidates said to be in the reckoning are Stephen Elop, who had a proven track record at Nokia.

Rumours had also swirled around Qualcomm's Steve Mollenkopf, till Qualcomm secured his continued service with a new contract.