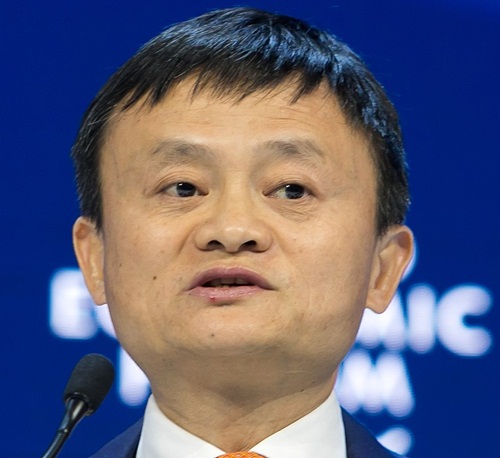 As Jack Ma prepares to step down as chairman of Alibaba Group, the online sales promotion he has championed for a decade notched another record.
Ma will hand the chairman’s role to chief executive Officer Daniel Zhang next year, passing along one of China’s highest profile corporate roles at a time when the country is embroiled in a trade spat with the US. Concerns about the impact of those tensions on a slowing economy have contributed to a 16-per cent slump in Alibaba’s share price this year.
In its 10th iteration, the annual Singles’ Day event notched an increase of 27 per cent, according to a tally posted at the event’s media centre in Shanghai. The final number compares with 39 per cent growth last year.
Shoppers in China and across the world snapped up hot items including iPhones, furniture and milk powder starting pre-dawn, with Alibaba recording roughly $10 billion in sales in the first hour after midnight.
Singles' Day, also called "Double 11", is the world's biggest online sales event, outstripping the sales of US shopping holidays Black Friday and Cyber Monday combined.
The Chinese event was originally a novelty student holiday to celebrate being single, countering Valentine’s Day, but has since grown into a month-long online shopping festival that peaks with a 24-hour sale on 11 November.
This year, the company surpassed last year's full-day sales record of 168 billion yuan in just under sixteen hours.
Despite the record haul, the annual sales growth rate fell from 39 per cent to 27 per cent, at the low end of analyst estimates, and the smallest rate in the event's 10-year history.
It comes as the company is grappling with a slimmer sales outlook amid rising trade tensions the US that have taken a bite out of China's economy.
Earlier this month it revised down its full-year sales outlook by 4-6 per cent, sending further chills through the company's stock price, which has dropped roughly 16 per cent this year after almost doubling in 2017.
To compensate, the company will take in less commission from its platforms in the near term in order to retain brands and attract new buyers, it said.
“I think a lot of investors get it wrong,” Vice Chairman Joseph Tsai said on Sunday. “No 1, China is not as bad as people think. No 2, Alibaba has some unique aspects, we’re really riding that secular trend, and when you talk about digitising the economy, Alibaba is uniquely positioned with technology and know-how.”
Tsai, a co-founder of the company, said he has no plans to follow Ma into retirement and will continue to look after investment strategy with a team of more than 100 people.
Meanwhile online sales growth is also slowing across the board in the country's eastern mega-cities, including Shanghai and Beijing, and Alibaba said roughly 75 per cent of new users last quarter were in "less developed" areas.
While small appliances and cosmetics were strong on Sunday, sales in big-ticket items including large appliances slowed alongside a downturn in the housing market, Alibaba Tsai told press.
"If people aren't buying new homes, they aren't buying appliances," he said.
Despite the milder growth, executives were upbeat on Sunday at a press event in Shanghai, attended by roughly 800 journalists who watched a live-streamed ticker of the sales.
"Today we reached 200 billion (yuan). But we have to change. We have to continue to change to reach 300 billion or 500 billion," said chief executive Zhang, who is credited with being the architect of the original Singles' Day sales.
Alibaba kicked off this year's sales with a gala event that featured US singer Mariah Carey, a Japanese Beyonce impersonator and a Cirque du Soleil performance.
It's expected to be the company's final November sale with founder and chairman Jack Ma at the helm.
During this year's event the company said it worked with 180,000 brands across over 200 countries, and shortly before midnight on Sunday it had sent over a billion packages.
A disproportionately large number of sales are recorded in the first minutes of the 24-hour spending spree, when transactions occur for items that have been put on hold.
The company settled roughly $1 billion within the first one minute and twenty five seconds after midnight.
Singles’ Day hasn’t always been about shopping and has its origins as an unofficial holiday on Chinese university campuses in the 1990s. The date, when written numerically as 11/11, looks like the Chinese expression for “bare branches,” a term to describe the unattached in a nation that emphasizes relationships.
It was Ma and Zhang who latched onto the idea of turning it into a consumer event, getting a boost from China’s expanding middle class and a massive online population.
MORE REPORTS