Amazon's real rival in India in the offing

Beyond the merged entity of Walmart-Flipkart, Amazon would have to face a bigger rival in India — the new e-commerce firm that Reliance Industries chairman Mukesh Ambani proposes — as it fights for a larger share of the $1-trillion digital economy by 2025. 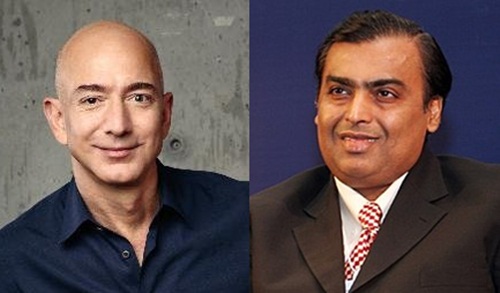 Ambani is reported to be waiting for the government to finalise its e-commerce policy for the roll-out of his e-commerce venture, which is expected to be a joint effort of Reliance stores and its telecom venture Reliance Jio Infocomm.
Once the draft e-commerce policy becomes law, the oil-to-telecom tycoon, who’s India’s richest man, will emerge as the most formidable challenger to the wealthiest person in the world.
Without Mukesh Ambani, India’s billion-strong consumer market was open to acquisition to rival American retail and e-commerce rivals —  Walmart and Amazon — making it an all-American affair.
With the new e-commerce policy in place, Reliance will have certain advantage in warehousing as foreign-funded firms aren’t allowed to hold e-commerce inventory in India. That will be disadvantage for Amazon and Walmart in fully capitalising on their logistics strengths.
If the new policy is implemented strictly, Amazon and its preferred resellers won’t be able to offer deep discounts.
Amazon has been banking on its proxy sellers to circumvent rules till now, but this will become difficult with the new e-commerce policy, which calls for harsh controls even on the proxy sellers that Amazon and Flipkart have been using.
On the other hand, companies like Ambani’s Reliance Retail Ltd will be free to improve their supply chains while building an online presence in partnership with his mobile operator, Reliance Jio Infocomm Ltd.
Also, the draft policy proposes a two-year period after which data generated in India – on social media (Facebook, Twitter, etc), via search engines (Google), or e-commerce (Amazon) – will have to be stored in India —  a move that would push up costs for western technology firms.
The Reserve Bank of India has already directed payment firms like Visa, Mastercard and PayPal Holdings to keep their Indian data exclusively in the country by October. This would also now apply for e-commerce data as well.
It was similar laws that existed in China that forced Amazon to sell its Chinese servers and some other cloud assets to a local partner.
Also, the policy prescribes that the Indian government would have access to the data stored in India, “subject to rules related to privacy, consent, etc.” But, an Indian data-privacy law is non-existent now.
For business, however, the stakes in the central data repository are significant for customer acquisition. The draft e-commerce rules now promise a single “know your customer” data portal, akin to Singapore’s MyInfo. This move could help Jio’s payments bank acquire customer deposits cheaply.
Detractors argue that the biometric database is unsafe, a threat to privacy, and a tool for digital exclusion because the failure rate of authentications is too high.
MORE REPORTS