US Supreme Court to decide on sales tax for online transactions

The US Supreme Court commenced hearings on Tuesday to decide whether online merchants have to collect sales tax irrespective of where they are located. 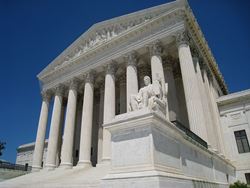 The court sounded concerned on Tuesday about doing away with a rule that has meant consumers don't get charged sales tax on some online purchases.
The judges heard arguments on collection of sales tax by businesses on online purchases. Curtrently, under an old Supreme Court rule, if a business ships a product from one state to another where it does not have an office, warehouse or other physical presence, it does not have to collect that state's sales tax.
Over 40 states have challenged this rule saying that due to the growth of internet shopping, they're losing billions of dollars in tax revenue every year.
However, several Supreme Court judges opined that it is for lawmakers to correct the problem if any, not the court.
Traditional retailers believe that shoppers pay less while buying products online as they do not pay taxes. The case came up after South Dakota challenged a 1992 Supreme Court order that ruled states cannot ask retailers to collect sales tax unless they had a physical presence in the state.
The state is appealing a lower court order that favoured three online retailers. Many states in the US want taxes on online sales as it would boost their incomes.
The Government Accountability Office last year estimated that governments were losing up to $13 billion a year in uncollected sales tax because of online sales. Others such as Marketplace Fairness Coalition, a private group, estimated the figure could be as high as $33 billion.
Besides South Dakota, 41 other states including California have sought an overturn of the ‘physical presence’ rule. They argue that the rule is outdated and unfair in the era of internet shopping. The US government is also backing them.
MORE REPORTS