ThyssenKrupp on Saturday defended merger talks with Tata Steel saying the consolidation of the sector in Europe was necessary due to the "difficult economic situation". 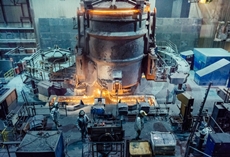 "We have always said that we consider a consolidation in the European steel sector necessary due to the very difficult economic situation," Thyssen spokeswoman Nicola Roettger said.

"The entire steel industry in Europe is fighting to continue to have a future in a difficult economic context," she said. "Very few European steelmakers are currently making profits," she said.

Tata Steel had evealed an alternate plan on Friday to look for a joint venture partner for its entire European business rather than a sale, saying it was in talks with its German competitor ThyssenKrupp AG and other unnamed groups to create a large European steelmaker, but did not give further details (See: British business secretary meets Tata Steel management).

Talks for the sale of Tata Steel's UK assets hit a roadblock due to the UK's decision to exit the European Union, which led potential buyers to re-evaluate their bids (Tata Steel's UK sales plans hit, but may keep Port Talbot).

Tata Steel had on 30 March said it will exit completely from its UK steel assets to cut losses (Tata Steel puts entire UK business up for sale ). This was followed by a sale process, and on 9 May, the company said it has shortlisted seven bidders interested in buying all of its UK steel assets (Tata Steel evaluating 7 expressions of interest for UK selloff ). However, the deal process hit a roadblock as Britain voted to leave the European Union.

Europe markets contribute significantly to Tata Steel UK's sales volumes and now there is uncertainty over new trade policies between the UK and Europe.

After a board meeting on Friday, Tata Steel said it had decided to evaluate ''alternative and more sustainable'' solutions for the European business. ''Consequently, Tata Steel has now entered into discussions with strategic players in the steel industry including ThyssenKrupp AG,'' the statement said. The company said discussions have been started for a JV; however, deal talks are at a preliminary stage.

Certain other brokerages like Credit Suisse expect an upside on the stock if deal talks fructify. ''While talks still at preliminary stage, this could create an upside for the stock,'' Credit Suisse said in its note today. In the note, the brokerage added that joint venture synergies with Thyssenkrupp could be at $550 million.

The company is likely to continue sale talks for its UK steel assets in parts, in parallel to its fresh attempts to find a joint venture partner for the entire Europe business, including the UK assets. However, the sale for UK assets may take longer on account of uncertainties over Brexit and its implications.

''Believe slow progress on UK sale is more or less priced in,'' Credit Suisse said in its note. The brokerage maintained outperform on the stock.