The next stage in selling Tata Steel's UK operations has been delayed due to Britain's decision to exit from the European Union, reports today said. 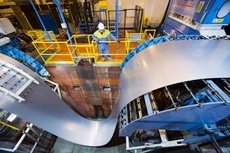 Newport's Liberty Steel and the management buyout team Excalibur are expected to press ahead with their bids, but there have been reports of other potential buyers withdrawing, according to the BBC.

Tata however has confirmed no bidders have so far pulled out in light of the EU leave result. But a bidders' shortlist expected this coming week is now unlikely.

Tata Steel employs over 6,000 workers at five sites in Wales - 4,000 of those at its Port Talbot plant. The steel giant has a further 6,600 people working at eight sites across England.

But it is not just the companies involved in the bidding process for those operations that are assessing the situation. The banks and investors backing them will be looking at whether leaving the EU changes the nature of the investment and the risk attached to it.

All businesses are considering the impact of Brexit, including Tata's customers. The EU market accounts for 69 per cent of Welsh steel exports.

Those who campaigned in favour of leaving in the referendum vote argued that trade with the European market would continue and claimed the EU did little to help the industry when it needed it.

Welsh Secretary Alun Cairns will be meeting business leaders this week to try to calm nerves over the impact of leaving the European Union.

Keeping Port Talbot?
Meanwhile, a report in The Guardian says Tata Steel is close to a deal to save its Port Talbot plant despite Britain's vote to leave the EU, as sterling's slump potentially boosts the industry's survival prospects.

It says according to sources familiar with Tata Steel's thinking, the company is still working on a deal with the government to keep its UK business, and that the slump in sterling's value could help the industry.

The company began a sales process for the business, and seven potential bidders were shortlisted, but it has decided to work on a deal to keep its UK concern after the government pledged to offer hundreds of millions of pounds of support and restructure the company's pension scheme.

A senior source close to the Indian company said it was still likely to keep the business, which would be a boost to the beleaguered Conservative government, whose efforts to help Port Talbot have been criticised. ''Unless something drastic happens, then early next week they will make a statement,'' The Guardian's statement said.

The company believes the impact of Britain voting to leave the EU, which threatens to spark years of uncertainty for businesses, could be softened by the weakening of sterling.

The pound fell to its lowest levels in 30 years against the dollar on Friday, which means it will be more expensive for China to export steel to Britain. Cheap imports from China have been one of the factors behind the crisis facing the steel industry.

It is understood, however, that Tata Steel's main concern is whether the government will be strong enough to push through changes to the British Steel pension scheme, which need to be enshrined in law.

The latest figures show the deficit has ballooned to £700 million, up from £485 million last year, and its liabilities are almost £15 billion.

Under the government's plan, drawn up with trustees and trade unions, the scheme would be spun off into a new ''shell'' company and the inflation-linked annual increase benchmarked against the consumer price index rather than the retail price index, potentially saving billions of pounds in future liabilities.

The pension protection fund and some MPs, however, have said this could create a dangerous precedent and encourage other companies to walk away from their pension liabilities.

A spokesman for Tata Steel said the company was ''committed to developing the best prospects possible for our UK operations''.

''Decisions by the UK electorate will always be respected by Tata Steel. Whatever the political framework, we are committed to developing the best prospects possible for our UK operations,'' he said.

Some of the bidders for Tata Steel UK are close to abandoning their talks with the Indian company after the referendum. Many were already frustrated by the sale process, however, and the growing likelihood that Tata Steel would keep the business.

The billionaire tycoon Wilbur Ross has signalled that he is ready to withdraw from the process, according to Sky News. However, Liberty House, which is run by Sanjeev Gupta, is still committed.

Gareth Stace, the director of the trade body UK Steel, has said the steel industry faces its biggest ever challenge because of the referendum result. He said, ''The decision to leave the European Union will send shockwaves across the UK's steel industry. Our sector is well versed in having challenges thrust upon it, but it's clear that this is like no other.''