Fighting radicalisation is not only necessary for regional security and mutual trust, but it is also necessary for the bright future of our younger generations. All of Asia should become stakeholders in emerging technologies in order to compete with the developed world and for this, the talents of the youth should be diverted towards science and rational thinking, Prime Minister Narendra Modi told a meeting of heads of states of member countries of the Shanghai Cooperation Organisation (SCO). 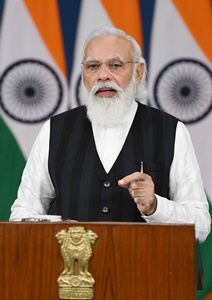 Countries can promote this kind of thinking and innovative spirit by connecting young entrepreneurs and start-ups, he said, adding that it was with this approach India organised the first SCO Start-Up Forum and Young Scientists Conference last year. In the previous years, India had successfully used technology in its development journey, he added.
India, he said, has voluntarily shared technologies like UPI and Rupay Card to increase financial inclusion and digital platforms like Aarogya-Setu and COWIN, evolved in the fight against Covid, with other countries. These open source technologies can also be shared with the SCO partners besides organising capacity building activities for this, the prime minister said.
The vast economic potential of the region has remained untapped due to radicalisation and insecurity, be it mineral wealth or intra-SCO trade, for lack of better connectivity. Central Asia, in particular, has been the connectivity bridge between major regional markets. This was also the basis of the prosperity of this region. India is committed to increasing its connectivity with Central Asia, he said.
Land-locked Central Asian countries can benefit immensely by connecting with India's vast market. Unfortunately, many connectivity options are not open to them today due to lack of mutual trust, he said. India’s investment in Iran's Chabahar port and the efforts towards the International North-South Corridor are driven by this reality, he said.
But, he said, the connectivity projects should be consultative, transparent and participatory to ensure mutual trust. In this regard, respect for the territorial integrity of all countries should be implicit. Based on these principles, SCO should develop suitable norms for connectivity projects in the region, he added.
This, he said should be the basis to restore the traditional connectivity of this region and only then connectivity projects will work to connect us, and not increase the distance between us. For this effort, India is ready to make any contribution from its side, the prime minister stated.
SCO, he said, should continue its focus on the priorities of the region. Better connectivity and people-to-people contacts will help further strengthen this role of SCO, he added.
Modi congratulated SCO summit host, President Rahmon of Tajikistan for organising and successfully conducting the summit and assured India’s full cooperation to next SCO chairman Uzbekistan.
The biggest challenges that the SCO faces are related to peace, security and trust-deficit and the root cause of these problems is increasing radicalisation. Recent developments in Afghanistan have made this challenge more apparent. SCO should take an initiative on this issue, he said.
Central Asia, he said, has been a bastion of moderate and progressive cultures and values. Traditions like Sufism have flourished here over the centuries and spread throughout the region and the world.  On the basis of this historical heritage of Central Asia, SCO should develop a common template to fight radicalisation and extremism.
In India, and almost in all SCO countries, there are moderate, tolerant and inclusive institutions and traditions associated with religion, he said, adding that SCO should work to develop a strong network between them. Modi pointed to the useful work being done by SCO-RATS and exhorted SCO partners to actively participate in the calendar of activities that has been built for India’s presidency of SCO-RATS.
He also welcomed Iran as a new member state of the SCO and also the three new Dialogue Partners - Saudi Arabia, Egypt and Qatar. SCO, he said, will become stronger and more credible with new members and dialogue partners.
MORE REPORTS