World Bank fears a possible rerun of the 1970s 'stagflation'

Global economic growth rate is expected to nearly halve to 2.9 per cent in the current year from 5.7 per cent in 2021, says the World Bank in its latest update of the report on World Economic Prospects, released on Tuesday. 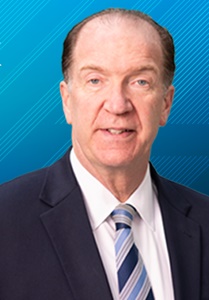 The deceleration of the global economy following two years of the SARS-Covid19 pandemic and the Russian Federation’s invasion of Ukraine has combined to further destabilise the global economy, says the report by the global lender.
Global economic growth is expected to slow down before the end of the year, and most countries should begin preparing for a recession, according to the World Bank’s latest global economic forecast.
“For many countries, recession will be hard to avoid,” wrote World Bank president David Malpass.
The World Bank now sees the global economy growing 2.9 per cent in 2022, down from 4.1 per cent forecast in January.
The after effects of the Covid-19 pandemic had already left international supply chains in tatters and significantly hampered income growth and poverty reduction efforts in developing countries, according to the report.
While the Bank had earlier predicted a slower yet robust recovery in the next few years, starting from 2022, the outbreak of war in Ukraine that led to soaring food and fuel prices and disrupted international trade networks forced the global lender to significantly downgrade its expectations.
“Just over two years after Covid-19 caused the deepest global recession since World War II, the world economy is again in danger,” Malpass wrote.
While many economist a big downturn that followed the 2008 market, but a moderate one that comes at the end of business cycles, the World Bank is warning that even a mild recession could leave lasting scars on the global economy, as the combination of today’s economic forces could lead to “stagflation,” a mixture of low growth and high prices that is toxic to economies in developing countries.
Malpass mentioned the threat of stagflation multiple times in the World Bank report, noting similarities in monetary policy environments between now and the last time stagflation hit.
“Several years of above-average inflation and below-average growth are now likely, with potentially destabilising consequences for low- and middle-income economies. It’s a phenomenon—stagflation—that the world has not seen since the 1970s,” he wrote.
Stagflation occurs when economic growth goes through a significant slowdown, but inflation and high prices persist. The last time the world went through a stagflationary period was during the 1970s oil shocks, when high oil prices caused high inflation worldwide and a recession in countries that imported large oil volumes from the Middle East.
“The interest rate increases that were required to control inflation at the end of the 1970s were so steep that they touched off a global recession, along with a string of debt crises in developing economies, ushering in a ‘lost decade’ in some of them,” Malpass wrote, adding that the same patterns of subdued growth, high interest rates, and escalating public debt in many countries are playing out today.
Resuming normal supply-chain operations and increasing production around the world are key to avoiding stagflation, Malpass said, but it won’t be easy. COVID-19 lockdowns in China’s production hubs over the past few months dealt a blow to global manufacturing, and energy constraints as a result of the war are standing in the way of supply chains returning to full normalcy.
The Bank has projected India's economic growth slowing further to 7.1 per cent in FY24. This is 30 basis points higher than the previous forecast of 6.8 per cent.
For FY25, GDP growth has been pegged at 6.5 per cent. One basis point is one-hundredth of a percentage point.
The report says that reducing the risk of stagflation requires "targeted and impactful" measures by policymakers globally which must begin immediately. These measures include:
Limiting the harm to people affected by the war in Ukraine by sharing the burden of housing, supporting, and the possible relocation of refugees and internally displaced people;
Countering the spike in oil and food prices by boosting supply and avoiding export and import restrictionsl
Stepping up debt-relief’
Strengthening health preparedness and effort to contain COVID-19; and
Speeding up the transition to low-carbon energy sources
"There is good reason to expect that, once the war in Ukraine stops, efforts will redouble—including by the World Bank Group—to rebuild the Ukrainian economy and revive global growth.
“In the meantime, policymakers everywhere must fight the world's other development crises: the catastrophe of higher food and energy prices, the threat of stagflation, the rise in inequality and instability, climate change, and the growing overhang of debt," the World Bank said.
In order to limit the harm to the war affected people in Ukraine, the World Bank has suggested relocation of the refugees and sharing the burden of housing the displaced people. Besides countries should avoid export and import restrictions ad boost supplies in order to counter the spike in oil and food prices besides stepping up relief related lending.
MORE REPORTS