Flush with low-cost deposits that get squeezed out only in small amounts of withdrawals by depositors ever since the 8 November demonetisation announcement by the government, country's largest lender, the State Bank of India (SBI), has cut its marginal cost of lending rate (MCLR) by 90 basis points across all maturities to boost lending.

With limits on deposits and withdrawals continuing to affect normal banking business for the second consecutive month and with no immediate respite in sight, banks have started lowering interest rates to rev up lending operations.

Another state-owned lender, Punjab national Bank (PNB) also reduced its one-year MCLR rate by 0.7 per cent to 8.45 per cent from 9.15 per cent effective today.

Lending rate was moderated by similar percentage points for 3 years and 5 years period to 8.60 per cent and 8.75 per cent, respectively.

Similarly, Union Bank of India reduced its one-year benchmark MCLR to 8.65 per cent from 9.30 per cent.

As things stand, not much of the deposits are taken out for consumer spending and there is not many borrowers either, which results in an increased flow of funds into low-yielding treasuries.

SBI will announce the revised rates for home loans and car loans based on the new MCLR on Monday.

SBI lends to retail borrowers at a rate which is 35 basis points over the MCLR. It is, however, not known whether SBI will pass on the entire reduction in MCLR to customers.

SBI also lends to housing finance companies like HDFC, which are also expected to reduce their rates depending on their cost of loans.

The SBI rates will be effective 1 January 2017. The bank has so far reduced the benchmark rate by 200 bps since January 2015, the statement said. 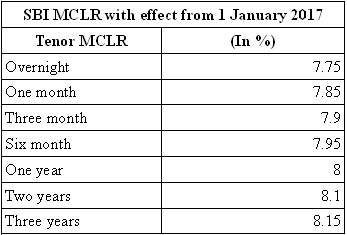 On Saturday, IDBI Bank and SBI associate State bank of Travancore (SBT) reduced their lending rates, on a day when the deadline for depositing scrapped Rs500 and Rs1,000 notes ended on 30 December.

IDBI Bank reduced its lending rate by 15 basis points. Following the revision, IDBI Bank's one-year MCLR stands at 9.15 per cent and the base rate, or the minimum lending rate at 9.50 per cent. Since April, IDBI Bank has lowered its MCLR by 30-60 basis points across tenors.

State Bank of Travancore (SBT) also slashed benchmark lending rate by up to 0.3 per cent. The bank has reduced marginal cost of funds based lending rate (MCLR) by 0.25 per cent to 9.20 per cent from 9.45 per cent for 1-year tenure, SBT said in a statement.

Other banks, too, will have to lower their lending rates, mainly because of the huge deposit accretion due to demonetisation. However, lending rates could rise soon after money was withdrawn from accounts on normalisation of the cash crisis, a banker warned.