State Bank of India (SBI), the country's largest lender, is planning its biggest ever share sale, which may fetch it Rs10,000-15,000 crore, which may hit the markets "anytime", bank officials said. 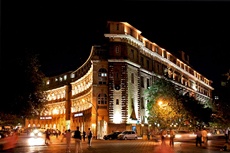 The state-owned bank said it has all the approvals in place for the issue, but added that timing for its launch has not been decided yet.

"We have not taken a call on the timing, though we have all the approvals in place and we can go for it any time after internally deciding on it," SBI deputy managing director and chief financial officer P K Gupta told PTI on Wednesday evening.

The news agency cited an i-banking source to say the lender may launch an investor roadshow this week or early next week.

Last month SBI had said its board and shareholders had approved the proposed QIP issue to raise money from the markets, which would make it the largest ever issue from a domestic institution.

In February, the bank had kicked off its largest-ever fund raising drive by picking up as many as nine investment bankers, including Goldman Sachs, Barclays and Bank of America Merrill Lynch (BofA-ML), sources said.

Late January, the lender had announced it would raise up to Rs15,000 crore through a public offer, which will include a rights issue, to fund business and meet global capital adequacy norms.

In the financial year that ends this month, SBI had raised Rs8,032 crore by selling shares through the QIP route.

The government had announced in the budget that it would infuse Rs2,970 crore in SBI under its Rs11,200 crore capitalisation plan for public sector banks in 2015-16.