The Reserve Bank of India has told a parliamentary committee that it has "no information on how much black money has been extinguished'' as a result of demonetisation of Rs500 and Rs1,000 notes nor about unaccounted cash legitimised through exchange of old currency. 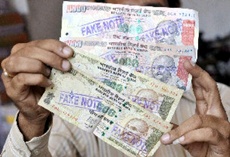 In a sixteen-page reply to questions raised by members of the Parliamentary Standing Committee on Finance headed by M Veerappa Moily on 12 July, the RBI also told the panel that subject to completion of verification process, it had got back currency notes to the value of Rs15.28 trillion till 30 June 2017.

Stating that an estimated Rs15.28 lakh crore in cancelled notes has come back "subject to future corrections based on verification process", the RBI also said it has "no information" whether demonetisation is being planned to be implemented at regular intervals.

The RBI has been facing flak from the opposition parties for demonetisation and delay in disclosing figures on the junked notes, even as the government has maintained that the 8 November 2016 decision to ban notes in circulation at that time has helped in curbing black money, as well as bringing more entities into the tax net and promoting cashless transactions.

In the last week of August, the panel failed to adopt a report on demonetisation, with even ruling Bharatiya Janata Party members led by Nishikant Dubey finding fault with the draft report, which had said that the measure cost the economy 1 per cent of GDP.

Last week in its annual report, the RBI finally made public the details of the junked notes that have come back into the system putting the figure at Rs15.28 lakh crore. The same figure has now been shared with the Parliamentary Standing Committee on Finance.

Replying to queries from the panel, the RBI said the verification for authenticity and numerical accuracy is still on, while some of the old notes which were accepted by banks and post offices are still lying uncounted in currency chests.

The central bank also informed the panel that the completion of the process of verification will take time in view of the large volume involved.

"Till such time as these notes are processed by the RBI, their numerical accuracy and authenticity, only in estimation of SBNs received back is possible. Subject to future correction, based on verification process when completed, the estimated value of SBNs received as on 30 June is Rs15.28 trillion," the RBI said in its written reply to the panel.

The RBI gave a similar reply to another question on how much counterfeit money has been legitimised through exchange of junked currency (See: RBI mum on fate of fake notes).

The central bank did not give any direct reply on adverse impact on the informal and unorganised sector, as also about the GDP loss. The RBI said the deceleration in overall economic growth figures for 2016-17 had begun "much before demonetisation" due to weakness in industrial and services sector.

In its annual report for 2016-17, the RBI had disclosed that all but about 1 per cent of the scrapped currency notes have come back into the system (RBI says 99% of scrapped notes have returned into system ).

The central bank did not give any direct reply on the adverse impact of the measure on the informal and unorganised sector, as also about the GDP loss. The RBI said the deceleration in overall economic growth figures for 2016-17 had begun "much before demonetisation" due to weakness in industrial and services sector.

Last week, several members of the panel had sought redrafting of its draft report on demonetisation as the RBI at that time had not provided some crucial details including on the quantum of junked notes.

The acceptance of the report was deferred as member MPs across party lines including BJD MP Bhartruhari Mahtab, SP MP Naresh Agrawal and BJP MP Nishikant had said that the panel's report on demonetisation needed to be "redrafted" while some of them stated that it "lacks punch".

In its annual report for 2016-17, the RBI had disclosed that all but about 1 per cent of the scrapped currency notes have come back into the system.