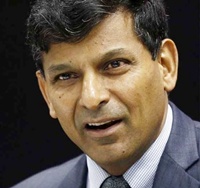 Raghuram Rajan has justified his costly market intervention that helped to shore up the country's foreign exchange resources and save the rupee from falling further as the only available medium term option available to the Reserve Bank of India at that time.

He also called for preserving the independence of the Reserve Bank and its governor, saying that with command over significant policy levers, the governor may occasionally have to disagree with the most powerful people in the country.

''We had to get back the confidence of international investors. And that meant convincing them that India was still an attractive place to invest in, despite the then paralysed economic reforms. Furthermore, they had to believe that the rupee would retain its value going forward,'' Rajan said.

''To bolster the value of the rupee, we had to give investors more certainty that future inflation would be low. After all, it was primarily India's higher inflation with respect to the rest of the world that led to periodic abrupt falls in rupee value,'' he added.

Rajan said he had the backing of the then deputy governor and now the governor Urjit Patel, who agreed to prepare a report on how to move to a new inflation-focused monetary regime. But, that was for the medium term, and for the short run RBI had to establish that the economy was not heading towards crisis. ''The easiest way to demonstrate that was to show we could raise plenty of foreign exchange.''

He said the mandarins in North Block had also spoken of an ''iffy scheme under which bankers would bring plenty of dollars in as FCNR(B) 3 year deposits, which they would convert to rupees and invested in India. In return, they wanted a cheap rate at which they could convert rupees back into dollars three years hence.''

The scheme would work so long as the Reserve Bank could provide the forward dollars. But it was a great deal for the banks – they got rupee interest income and a guaranteed cheap price at which they could swap maturing rupees back into dollars.

But, for the RBI, its cost could be huge, when the rupee falls against the dollar. ''If we did not move the rupee back to fundamental value, every 1 rupee rise in the dollar-rupee rate would costs us Rs40,000 crores more in import costs. Assuming the rupee was undervalued by Rs3 for a couple of years, this would mean a loss of lakhs of crores to national income. In contrast, even if the scheme was wildly successful in attracting inflows, the payout would only be in the tens of thousands of crores.

''Of course, there might be cheaper ways of restoring confidence but it was not clear what they were'', he added.

He said, he did not blindly follow banks' advice and that even his colleagues wanted to give the idea a try, adding that he agreed to the idea after fully weighing the risks.

''The bottom line was that the scheme was a measured risk, with a probability that the RBI would lose money, a certainty that the bankers would make money, but also a reasonable chance that the country would be significantly better off.

''The afternoon of September 4th 2013, we announced the package of measures. The FCNR(B) scheme drew in $26 billion, more than any of us anticipated. But more important, confidence picked up, the rupee continued strengthening beyond when the money came in, partly because the global investor mood as well as Indian electoral projections also changed, and we covered our forward swaps cheaply. We are fully covered for outflows today and have made money on the deal. The rupee has been one of the most stable emerging market currencies since then.''

''Of course, in hindsight it seems like it was the obvious thing to do because it worked. The reality is we will never know for certain! Perhaps it was the other elements of the package, perhaps it was everything together. Autobiographies are always written as if the author had it all mapped out with perfect foresight, ignoring the risks and uncertainties at that time,'' Rajan added.

On RBI's independence
''There is a reason why central bank governors sit at the table along with the finance ministers in G-20 meetings. It is that the central bank governor, unlike other regulators or government secretaries, has command over significant policy levers and has to occasionally disagree with the most powerful people in the country.

''It is dangerous to have a de facto powerful position with low de jure status. Today, the RBI governor has the salary of the cabinet secretary. He or she is appointed by the prime minister in consultation with the finance minister. The governor's rank in the government hierarchy is not defined but it is generally agreed that decisions will only be explained only to the prime minister and the finance minister. There is an informal understanding in India that the governor has the room to make needed decisions. In the interests of macroeconomic stability, none of this should be changed, though if these issues are ever revisited, there may be some virtue in explicitly setting the governor's rank commensurate with his/her position as the most important technocrat in charge of economic policy in the country."

Rajan said, the RBI under him has undertaken important reforms in payments, in banking, in the conduct of monetary policy and liquidity management, in financial markets, and in the resolution of distress, as well as within the RBI itself.

''Only time will tell whether they will have lasting impact, but I tried to do the best job I could, without fear or favor,'' he added.