More reports on: In the news, Banks general, Jewellery 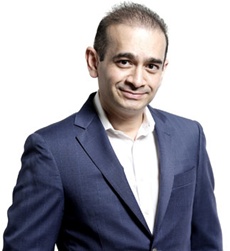 In its bankruptcy filing in the Southern District of New York, the company claims to have assets and liabilities in the range of $50 million to $100 million.

The Central Bureau of Investigation (CBI) on Tuesday said that PNB has informed the agency about a further scam involving Rs 1,251 crore.

"PNB has informed us that further scam of Rs 1,251 crore has been detected in respect to Gitanjali Gems. CBI is now probing Rs 12,636 crore which is (Nirav and Gitanjali) PNB scam, up from Rs 11,421 crore," said CBI.

The fraudulent transactions unearthed earlier this month at one of PNB's Mumbai branches, has now crossed the $2 billion mark.

Modi, founder of Firestar Diamond, and his uncle Mehul Choksi, who owns Gitanjali Gems Ltd, are suspected of colluding with two employees from Punjab National Bank in the fraud.

It was found that jewellery designer Nirav Modi and his maternal uncle Mehul Choksi used letters of understanding that were fraudulently issued from PNB's Brady Road branch in Mumbai in favour of Hong Kong branches of Allahabad Bank and Axis Bank. These letters were used to facilitate Rs280.7 crore of fraud by the duo.

As per the FIR lodged with the CBI, Shetty and Kharat had transmitted SWIFT instructions to the Hong Kong branches of Allahabad Bank and Axis Bank for raising buyers credit and for funding the Nostro accounts of PNB, without due procedure.

The LoUs were issued on behalf of Diamond R US, Solar Exports, Stellar Diamonds.

CBI, in a related development, is reported to have sought information from the executive director of ICICI bank, N S Kannan, who is the leader of the consortium of banks that lent money to Gitanjali Group.

The income tax authorities, meanwhile, sent notices to banks that have loaned money to Modi's Firestar Diamond and Choksi controlled Gitanjali, seeking to recover Rs 305.12 crore tax dues from them.

The revenue department is reported to have written to 21 banks seeking to attach the assets of Nirav Modi's Firestar Diamond.

While the revenue department has a right to recover its dues from the banks or any other person who is believed to receive the money from the defaulter, creditor banks seem to have an upper hand in dues recovery under the Insolvency and Bankruptcy Code (IBC) and the Securitisation and Reconstruction of Financial Assets and Enforcement of Security Interest (Sarfaesi) Act.