ICICI to use robots in big way for KYC, other routine tasks 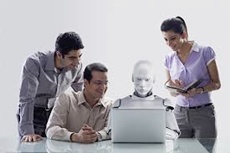 Goldman Sachs, UBS and other international banks have been using robots for some time. Now, Indian banks are also warming up to the idea of using of artificial intelligence. ICICI Bank claims to be the only bank in the country to be using software robotics in the banking processes, and said that this has helped it to reduce response time to customers by up to 60 per cent.

The lender had started experimenting with software robots at the start of this financial year and now has over one million banking transactions across 200 business process functions being carried out through AI on a daily basis.

Chanda Kochhar, managing director and chief executive officer of ICICI Bank, said that by the end of this financial year the bank plans to more than double the number of transactions being carried out in this way. "Currently about 10 per cent of our internal transactions are being carried out via this software robots and by the end of this year we believe that this will go up to 20 per cent of our transactions. This has helped us in improving productivity and efficiency and will help us in handling larger volumes as we continue to grow," he said.

Software robotics is a step-up above automation to ensure that there is a seamless interaction between applications.

Kochhar also explained that these are being typically used for transactions that have high volumes, are time-taking and are repetitive in nature. Currently, the bank is using it across various functions such as retail banking, treasury, rural banking, Human Resources, etc.

This automation of processes will also help them in saving costs. The bank has already seen a drop in its cost to income ration from 40.5 per cent in FY13 to 34.7 per cent in FY16 and attributes it to the increased use of technology as one of the factors. Going ahead, the management believes that they will be able to maintain the cost to income ratio at the same level with the help of technology despite an increase in costs due to expansion of branches, ATMs, etc.

Not only ICICI Bank but other banks are also gradually exploring the use of robotics and artificial intelligence in banking operations.

For instance, HDFC Bank is set to deploy a robot in front-end transaction at their branches. The lender is set to launch it soon in one of their branches in Mumbai. And this front-end robot apart from greeting customers will also help in carrying out basic transactions.