14 cities with worst air pollution are in India: WHO

Fourteen of the 20 most polluted cities in the world are in India, according to a list released by the World Health Organization on Sunday. 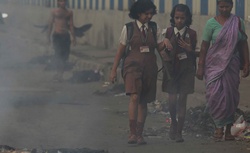 Topping the list in terms of PM 2.5 concentrations in 2016 was Kanpur, followed by Faridabad, Varanasi, Patna and 10 other Indian cities, including of course Delhi in sixth spot. Indian cities occupied positions 1 to 14, with Kuwait’s Ali Subah Al-Salem in 15th place.
Srinagar, Lucknow, Gurugram and Agra were some of the other cities that featured in the top 20. Bamenda in Cameroon, Peshawar, Rawalpindi, and Kampala were the six non-Indian cities on the list.
The ranking is based on the amount of fine particulate matter PM 2.5 in the air. This includes pollutants like sulphate, nitrate and black carbon, which pose the greatest risk to human health.
The WHO has called upon member-countries in its Southeast Asia region to aggressively address the double burden of household and ambient (outdoor) air pollution, saying the region accounts for 34 per cent or 2.4 million of the seven million premature deaths caused by household and ambient air pollution globally every year.
On a positive note, the report cited the Pradhan Mantri Ujjwala Yojana Scheme as an example to taking measures to control air pollution. The WHO said the scheme has enabled 37 million women living below the poverty line to switch to clean energy by providing them with free LPG connections.
The report pointed out that most countries, especially high income countries, are taking action to lower air pollution from particulate matter.
"We are seeing an acceleration of political interest in this global public health challenge. The increase in cities recording air pollution data reflects a commitment to air quality assessment and monitoring," Dr Maria Neira, Director of the Department of Public Health, Social and Environmental Determinants of Health at WHO said.
The WHO’s global urban air pollution database measured the levels of fine particulate matter (PM10 and PM2.5) from more than 4,300 cities in 108 countries. It said ambient air pollution alone caused some 4.2 million deaths in 2016, while household air pollution from cooking with polluting fuels and technologies caused an estimated 3.8 million deaths.
Since 2016, over 1,000 additional cities have been added to WHO’s database, which shows more countries are measuring and taking action to reduce air pollution than ever before.
“WHO estimates that around 7 million people die every year from exposure to fine particles in polluted air that penetrate deep into the lungs and cardiovascular system, causing diseases including stroke, heart disease, lung cancer, chronic obstructive pulmonary diseases and respiratory infections, including pneumonia,” the report said.
According to the report, more than 90 per cent of air pollution-related deaths occur in low- and middle-income countries, mainly in Asia and Africa, followed by low- and middle-income countries of the Eastern Mediterranean region, Europe and the Americas.
“Around 3 billion people — more than 40 per cent  of the world’s population — still do not have access to clean cooking fuels and technologies in their homes, the main source of household air pollution,” it said.
It said the WHO recognises air pollution is a critical risk factor for non-communicable diseases (NCDs), causing an estimated 24 per cent of all adult deaths from heart disease, 25 per cent from stroke, 43 per cent from chronic obstructive pulmonary disease and 29 per cent from lung cancer.
“Many of the world’s megacities exceed WHO’s guideline levels for air quality by more than 5 times, representing a major risk to people’s health,” Maria Neira, director of the department of public health, social and environmental determinants of health, at WHO, said, adding, there is an acceleration of political interest to deal with this global public health challenge.
“Air pollution threatens us all, but the poorest and most marginalised people bear the brunt of the burden. It is unacceptable that over 3 billion people — most of them women and children — are still breathing deadly smoke every day from using polluting stoves and fuels in their homes,” said Tedros Adhanom Ghebreyesus, Director General of WHO.
Air pollution does not recognise borders. Improving air quality demands sustained and coordinated government action at all levels,” the WHO said.
MORE REPORTS