India and Germany have resolved to intensify bilateral and multilateral cooperation to deal with the threats of terrorism and extremism, Prime Minister Narendra Modi said on Friday after holding wide-raging talks with German Chancellor Angela Merkel. 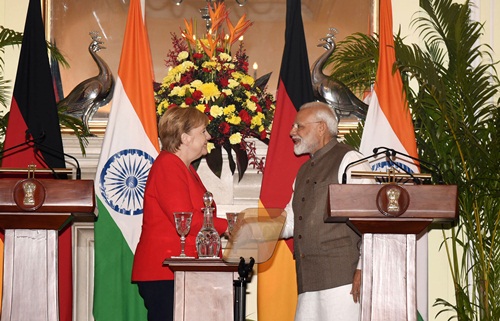 The two leaders co-chaired the fifth Inter-Governmental Consultations, after which India and Germany signed five joint declarations of intent and inked 11 agreements in fields such as space, civil aviation, maritime technology, medicine and education.
"We have vowed to build 'new India' by 2022 and expertise of technological, economic powerhouses like Germany will be useful for it," Modi said in his press statement after the meeting.
"We have resolved to intensify bilateral and multilateral cooperation to deal with terrorism and extremism," he added.
India and Germany will continue cooperation to expedite reforms in UN Security Council, Modi said.
He said that India has invited Germany to take advantage of opportunities in defence production in the defence corridors in UP and Tamil Nadu.
"We have decided to tap cooperation possibilities in e-mobility, smart cities, cleaning of rivers and environmental protection," Modi said.
Merkel said agreements signed between Germany and India prove that ties are marching ahead in the areas of new and advanced technology. Areas of 5G and artificial intelligence are a challenge and it is important to work on them together, she said.
"We will be happy to engage in big infrastructure projects which India is envisaging," Merkel said.
India’s minister of external affairs S. Jaishankar and German foreign minister Heiko Maas signed the joint declaration of intent on consultations for the period 2020-2024.
Ministry of railways (MoR) and Germany’s ministry for economic affairs and energy signed a joint declaration of intent regarding cooperation on strategic projects.
India’s ministry of housing and urban affairs and German ministry for economic cooperation and development also signed a joint declaration of intent on Indo-German partnership for green urban mobility.
Ministry of science & technology and German ministry of education and research signed a joint declaration of intent for cooperation in research and development of artificial intelligence.
Ministry of housing and urban affairs and Germany’s ministry for environment, nature conservation and nuclear safety signed a joint declaration of intent regarding the cooperation in the field of prevention of marine litter.
Besides, the two sides several agreements on the sidelines of bilateral talks. These include:
Addressing a joint press meet along with German Chancellor in New Delhi today, Prime Minister Narendra Modi said bilateral relations between India and Germany are based on the fundamental belief in democracy and rule of law.
Appreciating the role of the Inter-Governmental Consultations, Prime Minister said this unique mechanism has helped deepen the bilateral relations between India and Germany in several fields such as new and advanced technoly, e-mobility, fuel cell technology, smart cities, inland water ways, coastal management, cleaning of rivers, environmental protection etc.
Welcoming Chancellor Angela Merkel and her delegation to India, the prime minister said Chancellor Merkel played a key role in strengthening India- Germany relations.
Prime minister said India is grateful for Germany’s support to India’s membership in export control regimes and other international forums.
He said both the countries would continue the cooperation in undertaking reforms in Security Council, United Nations and other international organisations.
MORE REPORTS