India to respond to US import tariffs despite STA-1 status

India will start imposing higher duties on select imports from the United States beginning 18 September as Washington refused to exempt Indian exports of steel and aluminium to the US from punitive tariffs. 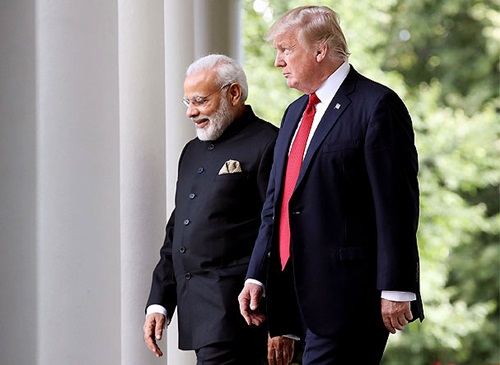 The new US rates that will kick in from today (4 August) as New Delhi’s attempts to persuade the Trump administration from imposing trade distorting tariffs failed to yield results.
With Washington refusing to exempt India from its tariff action, India has been left with no other option than raise taxes on some US products, including almonds, walnuts and apples, as a retaliatory measure.
Officials from New Delhi and Washington, including US secretary of state Mike Pompeo and defence secretary Jim Mattis, are scheduled to hold a series of meetings, including strategic talks, with their Indian counterparts in September.
Differences between India and the United States over the trade gap have been simmering ever since President Donald Trump took office. While bilateral trade rose to $115 billion in 2016, it has left a $31 billion surplus with India.
Washington is now pressing New Delhi to ease trade barriers, especially in manufactured products, with President Trump often invoking the high duty that India imposes on US luxury bike brand Hardly Stevenson.
India, the world's biggest buyer of US almonds, had in June proposed to raise import duties on the commodity by 20 per cent and a 120-per cent duty on import of walnuts, joining the European Union and China in retaliating against Trump's tariff hikes on steel and aluminium.
India has proposed to buy petroleum products from the US to help narrow the trade deficit. The United States has also emerged as a top arms supplier to India and US companies are bidding for military aircraft deals worth billions of dollars.
This is despite Washington elevating India to the status of a Nato ally in defence deals. US issued a federal notification making India the third Asian country after Japan and South Korea to get the Strategic Trade Authorization-1 (STA-1) status, paving the way for high-technology product sales to New Delhi, particularly in civil space and defence sectors.
India is the 37th country to be designated the STA-1 status by the United States.
The federal notification, issued yesterday, gains significance as the Trump Administration made an exception for India, which is yet to become a member of the Nuclear Suppliers Group (NSG).
Traditionally, the US has placed only those countries in the STA-1 list who are members of the four export control regimes: Missile Technology Control Regime (MTCR), Wassenaar Arrangement (WA), Australia Group (AG) and the NSG.
In its federal notification, the Trump Administration notes that India is a member of three of the four multilateral export regimes.
Mainly because of the political opposition from China, India's membership application has been pending before NSG, which takes decision by consensus.
By placing India in the STA-1 list, the United States has acknowledged that for all practical purposes India adheres to the export control regimes of the NSG.
MORE REPORTS