India not to buy energy from Nepal's China-built power projects

India will clearly tell Nepal’s Prime Minister KP Oli who is on a three-day visit to the capital that it won’t surrender its commercial interests to benefit China, whose interests the Himalayan nation tries to sponsor under Oli. 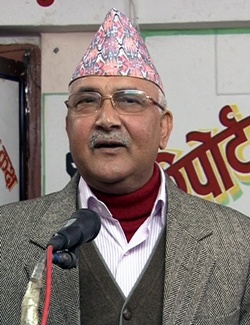 Reports quoting official sources said that Indian Prime Minister Narendra Modi is expected to make it clear to Oli that if he awards more dam-based projects to China, India will not be buying energy produced by Nepal.
If Oli wants China to build power projects in his country let Nepal also sell power so produced to China, a report in The Indian Express quoted a senior government official as saying.
Oli, however, was given a grand welcome at the Indira Gandhi International Airport in Delhi with home minister Rajnath Singh, minister of state for finance Shiva Pratap Shukla and officials from the external affairs ministry reaching the airport to welcome him today.
As per standard protocol, state level minister receives foreign dignitaries during state visit.
India is annoyed at Nepal’s move to award the $2.5-billion Budhi Gandaki project, which is situated in the Budhi Gandaki river in central-western Nepal. The project was initially given to China last year, when former Prime Minister Pushpa Kamal Dahal had decided to join China’s Belt and Road Initiative. However, it was soon cancelled by his successor Sher Bahadur Deuba, who said that it had been concluded in an “irregular and thoughtless manner”.
Oli is now reported to be determined to revive the project, according to the South China Morning Post.
“Political prejudice or pressure from rival companies may have been instrumental in scrapping the project. But for us, hydropower is a main focus and come what may, we will revive the Budhi Gandaki project,” the paper quoted Oli as saying.
However, selling electricity from the Budhi Gandaki project back to China would be a tricky proposition for Nepal, considering the difficulty in building power transmission lines along a rocky terrain on the China-Nepal border.
At the same time, Nepal needs a proactive India in the ‘Neighbourhood First’ spirit.
Nepal’s preference for China is due mainly to the fact that its import of highly expensive petroleum from India cots the country heavily and it needs to develop cheaper hydropower as an alternative.
Modi and Oli are expected to come to an agreement regarding the foundation stone of the $1.5 billion, 900 MW Arun III hydro-electric project in the Sankhuwasabha district of eastern Nepal.
PM Oli arrived in the Indian capital leading leading a 54-member delegation — 45 from Nepal and nine from India.
Oli’s spouse Radhika Shakya, foreign minister Pradeep Gyawali, physical infrastructure and transport minister Raghubir Mahaseth, minister for industry, commerce and supplies Matrika Yadav and PM’s chief political advisor Bishu Rimal, among other officials, are accompanying the prime minister.
Foreign minister Gyawali, who is at Baku, Azerbaizan to attend the Mid-Term Ministerial Meeting of the Non-Aligned Movement (NAM), is scheduled to join the PM’s delegation late in the afternoon.
PM Oli is scheduled to hold a brief meeting with Prime Minister Narendra Modi this evening.
He will also hold a meeting with president of Opposition Congress party Rahul Gandhi.
MORE REPORTS