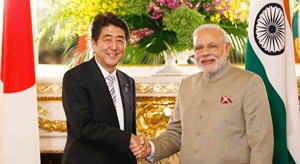 The two countries had agreed on the broad contours of cooperation in civil nuclear energy during Japanese Prime Minister Shinzo Abe's visit to New Delhi last December, but a deal was delayed as certain technical and legal issues had to be sorted out.

Now that these issues have been sorted out and the two sides have completed all internal procedures, the agreement is likely to be signed during PM Modi's two-day visit on 11-12 November.

External affairs ministry spokesperson Vikas Swarup, however, said while both the countries have completed the internal procedures, including legal and technical aspects of the text of the pact, a final deal could yet be delayed.

For one thing, there is political and moral resistance to Japan going ahead with a nuclear deal with India, particularly after the disaster at the Fukushima Nuclear Power Plant in 2011.

A civil nuclear cooperation deal with Japan would open up the Indian market for US-based Japanese nuclear plant makers Westinghouse Electric Corporation and GE Energy Inc to set up atomic plants in India.

PM Modi will also hold his annual summit meeting with Japanese Prime Minister Shinzo Abe and have an audience with the Emperor of Japan during his two-day visit.

Swarup also said the PM has welcomed the increased interaction between both the countries and has now called for a strengthening of exchanges between state-level legislatures.

Ahead of his trip, a delegation of Japanese parliamentarians called on Prime Minister Modi on Thursday, which was led by Toshihiro Nikai.

''The prime minister welcomed the initiative of Toshihiro Nikai to raise awareness about the threat posed by tsunamis, and sought strengthening of bilateral cooperation in the field of disaster risk reduction and disaster managemen

Swarup said the Prime Minister recalled his interaction with the Japan-India Parliamentarians' Friendship League in September, and welcomed increased interaction between the legislatures of both countries. He said PM Modi also called for strengthening exchanges between State-level legislatures.

"The Prime Minister welcomed the initiative of Toshihiro Nikai to raise awareness about the threat posed by tsunamis, and sought strengthening of bilateral cooperation in the field of disaster risk reduction and disaster management," he said.

Appreciating Japan's technical expertise and experience in Disaster Risk Reduction (DRR) and Disaster Management, Rijiju said India would like to gain from Japan's leadership in the field.

The Japanese Minister invited India's participation in the two DRR related Conferences being held in Japan during 19-20 December 2016 and 24 January  2017.

Rijiju assured that India will be appropriately represented, even at the ministerial level if required.