Indian companies are looking to invest up to $20 billion in the development of Iran's Chabahar port as they seek overseas expansion in the quest for energy resources. 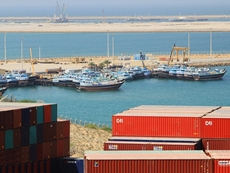 Petroleum minister Dharmendra Pradhan visited Iran over the weekend to push the proposal. He was accompanied by a delegation of state-run companies, including IOC, OVL, OIL, EIL, MRPL, NALCO, and RCF,  and officials from the ministries of petroleum and natural gas, finance, fertilizer, petrochemicals and shipping.

At a meeting with his Iranian counterpart Bijan Zangeneh in Tehran on Saturday, Pradhan requested Iran to allocate adequate land in the Chabahar Special Economic Zone (SEZ), state-run Oil and Natural Gas Corp (ONGC) said in a statement on Sunday.

''Pradhan conveyed to the Iranian side that Indian companies could invest up to $20 billion and were interested in setting up petrochemical and fertiliser plants, including in the Chabahar SEZ, either through joint venture between Indian and Iranian public sector companies or with private sector partners,'' the statement said.

''In this regard, he requested Iran to allocate appropriate and adequate land in the SEZ. He also expressed India's interest in setting up a LNG plant and a gas cracker in the Chabahar port,'' it said.

''He also requested the Iranian side for favourable treatment in the pricing of gas for India and also supply of rich gas at competitive price and on long term basis for the life of the joint venture projects that Indian companies are interested in setting up,'' it added.

India and Iran had, in May 2014, signed a memorandum of understanding (MoU) to jointly develop the port once the international sanctions against Iran were lifted.

Chabahar is located in the Gulf of Oman on the border with Pakistan, and India hopes to use the port and the SEZ as a transit hub for access to markets in Iran and further into Afghanistan and Central Asian countries, skirting Pakistan.

Pradhan is also said to have expressed India's interest in importing LPG from Iran and wanted companies from both sides to discuss setting up an extraction plant in Chabahar.

During the first visit by an Indian minister to Iran since the lifting of Western sanctions against the country, Pradhan and his delegation visited the Chabahar free trade zone and port and discussed the facilities and incentives which could be offered to Indian companies, it added.