India’s gross national product (GDP) during 2021-22 is estimated to have expanded by 8.7 per cent against a contraction of 6.6 per cent in 2020-21, provisional estimates of gross/net national income and per capita income released by the National Statistical Office (NSO) showed. 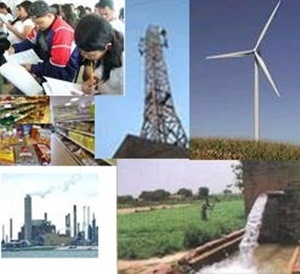 Real gross domestic product, or GDP at constant (2011-12) prices, in Q4 2021-22 is estimated to have expanded at a slower pace of 4.1 per cent to Rs40.78 lakh crore, against Rs39.18 lakh crore in Q4 2020-21.
GDP at constant (2011-12) prices is estimated to have attained a level of Rs147.36 lakh crore in the year 2021-22, as against the first revised estimate of Rs135.58 lakh crore for the year 2020-21, released on 31 January 2022.
Nominal GDP or GDP at current prices in the year 2021-22 is estimated to have grown at 19.5 per cent to Rs236.65 lakh crore, against Rs198.01 lakh crore in 2020-21.
The Second Advance Estimates (SAE) of National Income for the year 2021-22 were released on 28 February 2022. These estimates have now been revised incorporating latest information on relevant indicators in the financial year.
The sector-wise estimates have been compiled using indicators like the Index of Industrial Production (IIP), financial performance of listed companies in the private corporate sector based on available quarterly financial results for these companies, third advance estimates of crop production, production of major livestock products, fish production, production/consumption of cement and steel, net tonne kilometres and passenger kilometres for Railways, passenger and cargo traffic handled by airlines, cargo traffic handled at major ports, sales of commercial vehicles, bank deposits and credits, accounts of central and state governments, etc, available for the financial year.
The total tax revenue used for GDP compilation includes non-GST as well as GST revenue. Improved data coverage, actual tax collections and expenditure incurred on subsidies, data revisions made by source agencies etc would have a bearing on subsequent revisions of these estimates, according to the release issued by the  ministry of statistics and programme implementation
These estimates are, therefore, likely to undergo revisions for the aforesaid causes in due course, as per the release calendar. Users should take these into consideration while interpreting the figures.
The next estimates of quarterly GDP estimates for the quarter April-June 2022 (Q1 2022-23) will be released on 31 August 2022, the ministry added.
MORE REPORTS