The Indian economy, after an estimated contraction of 7.7 per cent in the current financial year (2020-21), is set for a record 11 per cent real GDP growth in 2021-22, while nominal GDP is expected to grow 15.4 per cent - the highest since Independence, according to the Economic Survey 2020-21. 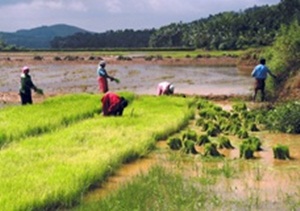 The Economic Survey 2020-21, presented by finance minister Nirmala Sitaraman in Parliament today, states that the robust, V-shaped rebound will be led by the low base and continued normalisation in economic activities as the rollout of Covid-19 vaccines gathers traction.
The fundamentals of the economy remain strong as gradual scaling back of lockdowns along with the astute support of Atmanirbhar Bharat Mission have placed the economy firmly on the path of revival. This path would entail a growth in real GDP by 2.4 per cent over the absolute level of 2019-20, implying that the economy would take two years to reach and go past the pre-pandemic level.
These projections are in line with IMF estimate of real GDP growth of 11.5 per cent in 2021-22 for India and 6.8 per cent in 2022-23. India is expected to emerge as the fastest growing economy in the next two years as per IMF report.
India adopted a unique four-pillar strategy of containment, fiscal, financial, and long-term structural reforms. Calibrated fiscal and monetary support was provided given the evolving economic situation, cushioning the vulnerable in the lockdown and boosting consumption and investment while unlocking, mindful of fiscal repercussions and entailing debt sustainability, the Survey says.
A favourable monetary policy ensured abundant liquidity and immediate relief to debtors via temporary moratoria, while unclogging monetary policy transmission.
The Survey says, the estimated GDP contraction of 7.7 per cent in FY2020-21, is composed of a sharp 15.7 per cent decline in first half and a modest 0.1 per cent fall in the second half.
Sector-wise, agriculture remained the silver lining while contact-based services, manufacturing and construction were hit hardest, and have been recovering steadily. Government consumption and net exports have cushioned the growth from diving further down.
While the lockdown resulted in a 23.9 per cent contraction in GDP in Q1, the recovery has been a V-shaped one as seen in the 7.5 per cent decline in Q2 and the recovery across all key economic indicators, the Survey states.
“Starting July, a resilient V-shaped recovery is underway, as demonstrated by the recovery in GDP growth in Q2 after the sharp decline in Q1. As India’s mobility and pandemic trends aligned and improved concomitantly, indicators like E-way bills, rail freight, GST collections and power consumption not only reached pre-pandemic levels but also surpassed previous year levels.”
The strong rebound of economic activities has been reflected in record-high monthly GST collections after the unlocking of industrial and commercial activity. A sharp rise in commercial paper issuances, easing yields, and sturdy credit growth to MSMEs portend revamped credit flows for enterprises to survive and grow, the Survey notes
On the sectoral trends, the Survey says the year also saw manufacturing sector’s resilience, rural demand cushioning overall economic activity and structural consumption shifts in booming digital transactions.
Agriculture has been the mainstay in the economy’s cushioning of the shock of the Covid-19 pandemic, with a growth of 3.4 per cent in both Q1 and Q2. A series of progressive reforms undertaken by the government have contributed to nourishing a vibrant agricultural sector, which remains a silver lining to India’s growth story of FY 2020-21.
“A palpable V-shaped recovery in industrial production was observed over the year. Manufacturing rebounded and industrial value started to normalise. Service sector sustained its recovery from the pandemic driven declines with PMI Services output and new business rising for the third straight month in December.
Bank credit remained subdued in FY 2020-21 amid risk aversion and muted credit appetite. However, credit growth to agriculture and allied activities accelerated to 7.4 per cent in October 2020 from 7.1 per cent in October 2019. October 2020 also saw resilient credit flows to sectors such as construction, trade and hospitality, while bank credit remained muted to the manufacturing sector. Credit  growth to the service sector accelerated to 9.5 per cent in October 2020 from 6.5 per cent in October 2019.
High food prices remained a major driver of inflation in 2020. However, inflation in December 2020 fell back into the RBI’s target range of 4+/-2 per cent to reach 4.6 per cent year-on-year as compared to 6.9 per cent in November. This was driven by a step fall in food prices, particularly of vegetables, cereals, and protein products and favorable base effects.
The external sector provided an effective cushion to growth with India recording a current account surplus of 3.1 per cent of GDP in the first half of the year, largely supported by strong services exports, and weak demand leading to a sharper contraction in imports (with merchandise imports contracting by 39.7 per cent) than exports (with merchandise exports contracting by 21.2 per cent). Consequently, the foreign exchange reserves rose to cover 18 months of imports in December 2020.
External debt as a ratio to GDP rose marginally to 21.6 per cent at end-September 2020 from 20.6 per cent at end-March 2020. However, the ratio of foreign exchange reserves to total and short-term debt (original and residual) improved because of the sizable accretion in reserves.
India remained a preferred investment destination in FY 2020-21 with FDI pouring in amidst global asset shifts towards equities and prospects of quicker recovery in emerging economies. Net FPI inflows recorded an all-time monthly high of $9.8 billion in November 2020, as investors’ risk appetite returned, with a renewed search for yield, and US dollar weakened amid global monetary easing and fiscal stimulus packages. India was the only country among emerging markets to receive equity FII inflows in 2020.
Buoyant Sensex and NIFTY resulted in India’s market-capitalisation to Gross Domestic Product (GDP) ratio crossing 100 per cent for the first time since October 2010. This, however, raises concerns on the disconnect between the financial markets and real sector.
Exports are expected to decline by 5.8 per cent and imports by 11.3 per cent in the second half of the year. India is expected to have a Current Account Surplus of 2 per cent of GDP in FY21, a historic high after 17 years.
On the supply side, Gross Value Added (GVA) growth is pegged at (-) 7.2 per cent in 2020-21 as against 3.9 per cent in FY2019-20. Industry and services are estimated to contract by 9.6 per cent and 8.8 per cent during the year.
Highlights of Economic Survey 2020-21
MORE REPORTS