The tractor rally led by farmer unions on the outskirts of Delhi went berserk today with participants breaking police barricades and entering the Red Fort, in a sign of defiance of authority, despite agreeing to the 36 conditions set by Delhi Police for allowing the farmers to take out their tractor rally. 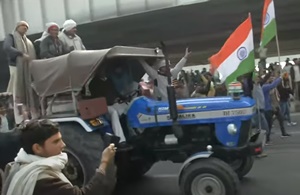 The tractor rally turned violent as protesters broke barricades, clashed with Delhi Police, held the streets to ransom and hoisted their flag atop the Red Fort by deviating from the designated route Police removed protesters from Red Fort.
Police used tear gas at Delhi's Mukarba Chowk, Nangloi to bring the groups under control. Clashes were also reported at ITO, Akshardham as well.
Violence continued at ITO in central Delhi, tractors being driven by protestors deliberately try to run over police personnel.
The Samyukta Kisan Morcha, the Bharatiya Kisan Union said that anti-social elements infiltrated farmers’ ‘peaceful movement’ and dissociated themselves from the violence.
Punjab CM Captain Amarinder Singh and the Aam Aadmi Party condemned the violence.
Punjab CM Captain Amarinder Singh took to Twitter to express shock over the violence in Delhi. "Shocking scenes in Delhi. The violence by some elements is unacceptable. It'll negate goodwill generated by peacefully protesting farmers. Kisan leaders have disassociated themselves & suspended #TractorRally. I urge all genuine farmers to vacate Delhi & return to borders," he posted.
"We condemn the violence that was seen in Delhi. It is regrettable that the Centre allowed the situation to deteriorate to such an extent. The movement has been peaceful for the last two months. Farmer leaders have said those who indulged in violence were 'external elements'," the Aam Aadmi Party said.
The MHA suspended internet services in several areas of Delhi to avoid rumour mongering on the social network and home minister Amit Shah is taking stock of the situation that marred the spirit of the Republic Day.
The tractor rally was scheduled to start after the celebrations of Republic Day in the Delhi. But protestors at Singhu Border broke the barricades in the morning, demanding to start the protest early before the agreed time.
Special Commissioner of Police (CP), Intelligence in Delhi Police, Dependra Pathak had, on Sunday, said, "The tractor rally will enter Delhi from Tikri, Singhu, and Ghazipur borders and return to its originating points. From Singhu, it will pass through Kanjhawala, Bawana, Auchandi border, KMP Expressway, and then return to Singhu."
But, protestors claiming to be farmers at both Singhu and Tikri border broke the barricades and entered the national capital with their march. They also took the route that was not suggested by the Delhi Police.
Farmers taking out the rally uniformly started leaving space for emergency services as instructed by delhi Police. The tractors were also decorated with national flag as the march began from Singhu border and stopped at the Kharoda Toll Plaza.
The protestors who were sitting at the Kharoda Toll Plaza Aichandi Border demanded to enter Red Fort in national capital.
"Wahh Guru ji ki khalsa wah guruji ki fateh. We are requesting the police to enter the national capital  to Red Fort. we will sit here till they allow us and repeal the Act," said the protestors.
Security personnel tried to convince the farmers that they have been given permission to hold their tractor parade in Delhi after the Republic Day parade at the Rajpath concludes. But the protestors remained adamant, broke barricades to march towards the Red Fort, forcing the police to take coercive action.
A member of the Sankyukt Kisan Morcha, an umbrella body of 41 unions, leading the protest against the three central farm laws at several border points of Delhi, said those who broke the barricades belonged to the Kisan Mazdoor Sangharsh Committee.
Releasing a statement on the violence spiralling on the Delhi streets,
The Samyukta Kisan Morcha said in a release that anti-social elements infiltrated farmers’ ‘peaceful movement’.
"We thank farmers for the unprecedented participation in today's Farmers Republic Day Parade. We also condemn and regret the undesirable and unacceptable events that have taken place today and dissociate ourselves from those indulging in such acts.
“Despite all our efforts, some organisations and individuals have violated the route and indulged in condemnable acts. Anti-social elements had infiltrated the otherwise peaceful movement. We have always held that peace is our biggest strength, and that any violation would hurt the movement,” the statement read.
The Kisan Mazdoor Sangharsh Committee had on Monday announced that they would hold their march on Delhi's busy Outer Ring Road on Republic Day.
The protesting unions has also announced a foot march to Parliament on 1 February, when the annual Budget is presented, to press for their demands including a repeal of the three new agriculture laws.
MORE REPORTS