SC stays own order to evict a million forest dwellers

The Supreme Court today put a freeze on its 10 January order directing state governments to evict more than a million forest dwellers and forest tribes across 16 states in the country, giving a big reprieve to hapless tribal population from certain displacement. 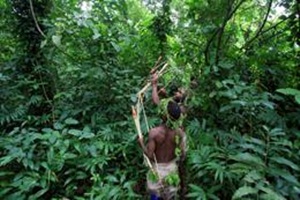 A Supreme Court bench headed by Justice Arun Mishra suspended its 10 January order following a plea by the ministry of tribal affairs for a stay of the judicial order in the interest of the forest-dwelling scheduled tribes and other traditional forest dwellers across the country.
The bench pulled up the ministry for not arguing its case when the previous order was passed, but agreed to examine whether the due process under the Forest Rights Act was followed by the state governments in deciding the claims of the forest dwellers and the process of adjudicating appeals before final rejection.
The court gave four months to the state governments for collating data and filing their detailed affidavits with regard to the processes followed in deciding claims and grant of ‘pattas’.
At the same time, the bench clarified that the "forest land should not remain encroached by mighty and undeserving people” under cover of the Forest Rights Act.
The court asked the state governments to appraise it about the category of forest dwellers who currently occupying the forest areas, along with a timeline to evict those who are not entitled to occupy such lands.
The satellite survey of the forest lands will also continue, added the bench.
Arguing for the forest dwellers, Solicitor General Tushar Mehta had earlier cited a symbolic relationship between forest rights and the protection of forest.
"States haven't been following the procedure. In some cases, one-line orders are being passed," he added.
The ministry, in its application, had sought suspension of the Supreme Court’s earlier order even as SC asked the state governments to submit details of rejection of claims by forest dwelling Scheduled Tribes and other traditional forest dwellers.
It pointed out that the court issued its order of eviction on February 13 based on the data adduced by the state governments regarding rejection of the claims by the forest dwellers.
"However, the said data did not provide the details of rejection," stated the plea, adding it has come to light that the claims of FDSTs and OTFDs were rejected in a summary manner where no due opportunity is provided to the claimants.
"It is uncertain whether the data furnished by the state governments accurately indicates whether the rejection orders were passed after observance of due process of law; compliance with principles of natural justice and whether appeal mechanisms have been properly exhausted. Without such information and compliance with the mandate of law in letter and spirit, the eviction of such tribal, would amount to serious miscarriage of Justice," said the Ministry.
It maintained that the forest dwellers and tribals are extremely poor and illiterate people and are not well informed of their rights and procedure under the Act.
"They live in remote and inaccessible areas of the forest. It is difficult for them to substantiate their claims before the competent authorities," stated the plea, adding the Forest Rights Act is a beneficial piece of legislation and deserves to be construed liberally in favour of the forest dwellers.
The ministry has therefore requested the bench to consider modifying its order of February 13 and direct the state governments to file detailed affidavits regarding the procedure followed and details of the rejection of claims.
"And till then the eviction of tribal may be withheld. The eviction of tribal, without such information would cause serious prejudice to such tribal who have been residing in forests for generation," pleaded the application.
MORE REPORTS