Maratha quota stir called off in Mumbai amidst large-scale violence

The Maratha Kranti Morcha, which is spearheading the agitation seeking reservation for the community, has called off the protest in Mumbai after incidents of violence were reported from various parts of the city. 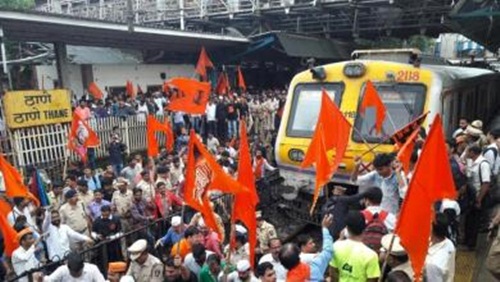 Stone throwing and arson were reported from several parts of the state, which remained on edge today and braced for a Mumbai bandh today.
Large-scale violence marred a state-wide protest on Tuesday in Aurangabad, where a constable died and nine other policemen were injured amid suicide attempt by three agitators.
Nationalist Congress Party (NCP) chief Sharad Pawar, himself a Maratha, is reported to have approached chief minister Devendra Fadnavis demanding that the government accept the demands of the agitators to end the stir – a quiet play by the party in an attempt to dethrone the ruling NDA from power.
Another group, the Sakal Maratha Samaj, lead protest in Navi Mumbai and Panvel, according to reports.
Internet services were suspended in rural areas of Aurangabad district to prevent any untoward incident.
The protestors had exempted essential services like water supply, fire brigade, ambulance services, hospitals, school and colleges, school buses from the bandh.
In the central suburb of Mankhurd, miscreants pelted stones and set a bus ablaze at about 1:45 pm. The fire has been doused and no casualties have been reported.
Earlier visuals from Kalyan railway station showed another Best bus was damaged during the stir. At least nine Best buses were damaged during Maratha quota stir.
Three police vehicles were set on fire in Kalamboli. Protesters also blocked Mumbai-Pune Expressway near Kalamboli. Protestors were seen pelting stones near Kalamboli on the Sion Panvel Highway.
DCP Deepak Deoraj, PRO, Mumbai Police, said that all the necessary deployments have been made in Mumbai. He said, "The situation should be brought under control at the earliest. The CM should invite prominent representatives from the community participating in the protest for talks and start the process of resolving the stand-off. There was never any law and order issue."
On Monday, one police constable lost his life while 9 others were injured in a suicide attempt by three agitators. The outfit had called for Maharashtra bandh after twenty-seven-year-old Kakasaheb Shinde had jumped off a bridge over Godavari river in Aurangabad. He was rushed to a hospital where he was declared dead.
MORE REPORTS