At least 53 people were killed, including 39 in Uttar Pradesh, and many more injured due to lightning and thunderstorms in four states since Sunday night, the union home ministry said today. 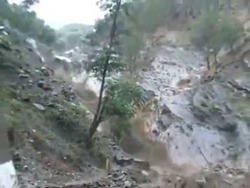 The India Meteorological Department has warned of more thunderstorms in north, north-east and parts of southern India for the next two days after Sunday's thunderstorm and dust storm left behind a trail of destruction in four states.
According to The Indian Express, the death toll could be as high as 75 after dust storms and thunderstorms swept through parts of West Bengal, Uttar Pradesh, Andhra Pradesh and the Delhi National Capital Region on Sunday evening.
The IMD has issued severe weather warnings for the next 72 hours for all regions between Kashmir and Andhra Pradesh. It has forecast that there could be light rain and thunderstorms accompanied by strong winds, although their intensity might lessen
Sunday evening’s storm saw wind speeds of up to 109 kmph in the national capital region followed by a strong squall. Metro and flight services were affected and the city witnessed multiple traffic jams. The Delhi Police had until 7:30 pm received 189 calls reporting fallen trees, 40 calls for fallen poles, and 31 reports of fallen tin sheds or roofs.
As many as 40 flights were diverted from the Delhi airport while Metro services were suspended for well over an hour.
At least 30 people have died in Uttar Pradesh alone (some reports say 51). Eight of them died due to drowning in Barabanki district. The toll for injured persons has gone up to 83 persons in the state, an official told PTI. Nine people were killed in Andhra Pradesh as the storm brought down walls, uprooted trees and snapped power connection in many regions.
Kasganj was the worst affected district in UP, a state government official told PTI. "Thirty-eight people were killed and 50 injured in the dust storm that lashed various parts of Uttar Pradesh on May 13-14," the official said. Five people were killed in Bareilly and Barabanki districts of UP, while 13 animals died in the storms.
Nine people were struck dead by lightning and three injured in Srikakulam and Kadapa districts of Andhra Pradesh, reports said. High-velocity winds uprooted trees and affected road, rail and air services on Sunday evening in several places in north India apart from Delhi.
Thunderstorms also occurred at isolated places in Himachal Pradesh, Uttarakhand, Punjab, Haryana, Chandigarh, Madhya Pradesh, Jharkhand, Assam, Meghalaya, Maharashtara, Karnataka, Kerala and Tamil Nadu, the India Meteorological Department (IMD) had said in its advisory on Sunday.
There doesn't seem to be any respite in sight as Charan Singh, a scientist at IMD, told NDTV that "there is a circulation of a western disturbance in north-west India. Our forecast shows weather will be adverse for the next 48 to 72 hours".
Private forecaster SkyMet Weather too has predicted dust storms and thundershowers with strong gusty wind, hailstorm and lightning in various parts of Odisha, West Bengal and Bihar during the next 12 hours.
The devastation comes over 12 days after storms hit Uttar Pradesh, Rajasthan, Telangana, Uttarakhand and Punjab, killing 134 people and injuring over 400 (See: UP, Rajasthan on 48-hour alert as dust storm leaves 127 dead).
MORE REPORTS