The Asian Development Bank (ADB) has projected a rebound in India’s economic growth with GDP reaching 7.3 per cent in the current fiscal and 7.6 per cent in the financial year 2019-20. ADB attributes this to increased productivity post GST and investment revival due to banking reform. 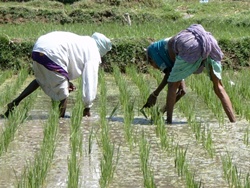 The economy grew 6.6 per cent in the last fiscal amidst a fall in demand in the wake of the 2016 demonetisation and teething troubles of businesses adjusting to Goods and Services Tax (GST) in 2017.
The ADB’s growth projection of 7.3 per cent this fiscal is in line with that of rating agency Fitch, but a tad lower than RBI’s forecast of 7.4 per cent.
In its Asian Development Outlook, 2018, ADB said growth in India will pick up as the new tax regime improves productivity and banking reform and corporate deleveraging take hold to reverse a downtrend in investment.
“In sum, growth is forecast to pick up to 7.3 per cent in FY2018 on improved rural consumption, a modest uptick in private investment, and less drag from net exports. Urban consumption growth will remain stable, and impetus from public investment modest,” it said.
Growth is expected to pick up further to 7.6 per cent in FY2019 as efforts to strengthen the banking system and continued corporate deleveraging are likely to bolster private investment. “Also set to catalyse growth are benefits from the GST as it mitigates geographic fragmentation and adds revenue to the exchequer, as well as further progress on fiscal consolidation and reform to promote FDI,” it said.
Growth in South Asia remains among the world’s fastest, driven by a recovery in India, the region’s largest economy, ADB said.
The Manila-based bank said Southeast Asia continued to benefit from the rise in global trade and the pickup in commodity prices. The subregion is expected to maintain its 2017 growth rate of 5.2 per cent in both 2018 and 2019. Strong investment and domestic consumption will drive an acceleration in growth in Indonesia, the Philippines, and Thailand, while an expansion in its industrial base will boost Vietnam.
Growth in Central Asia is expected to reach 4.0 per cent in 2018 and 4.2 per cent in 2019, on the back of rising commodity prices.
Meanwhile, growth in the Pacific will reach 2.2 per cent and 3.0 per cent over the next two years as the region’s largest economy, Papua New Guinea, stabilises following an earthquake that temporarily disrupted gas production.
Asian consumers and commodity price rises will fuel higher inflation in the region. Regional consumer price inflation is projected to accelerate to 2.9 per cent in 2018 and 2019, from the 2.3 per cent registered in 2017. Inflation projections for the next 2 years, however, are well below the 10-year regional average of 3.7 per cent.
On China, ADB said the service sector is fuelling the economy’s continued growth, which would increase by 8 per cent in 2017. Growth in the PRC will slow to 6.6 per cent in 2018 and 6.4 per cent in 2019, following the rapid 6.9 per cent expansion in 2017.
While recent US tariffs on select products have not yet dented China’s trade, ADB said, further actions by the US and counteractions against them could undermine business and consumer confidence in Asia and the Pacific.
Higher US interest rates could accelerate capital outflows, although this risk is mitigated to some degree by abundant liquidity throughout the region. Fortunately, most Asian economies are well positioned to meet these challenges.
Rising private debt remains a concern in some Asian economies. ADB research prepared for the ADO shows that debt accumulation has a positive impact on economies only in the short run.
Private debt in developing Asia has risen markedly since the global financial crisis and its limited effect on output suggests not all of the additional debt is channeled into productive investments. Authorities can counter this risk by strengthening regional financial systems, ADB said.
MORE REPORTS