India has got the dubious distinction of having the highest bribery rate in the Asia Pacific, with a survey showing today that more than two-thirds of Indians had to pay 'tea money' or fork out other forms of bribe to get public services. 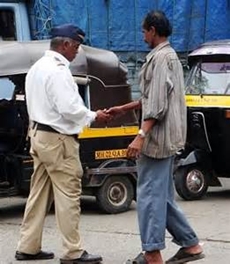 India had the highest bribery rate among the 16 Asia Pacific countries surveyed by Transparency International. Nearly seven in 10 Indians who had accessed public services had paid a bribe. In contrast, in the least corrupt country - Japan, only 0.2 per cent of the respondents reported paying a bribe.

Simplify norms
But according to Forbes magazine, the answer to corruption is not one-off steps like demonetisation, but to simplify the system of rules, which at present is so ghastly and complicated that no one not bribing can ever get anything done.

The bureaucratic rules which surround business activity in India are so bad that cash dealings off the books allow things to be done.

That in turn means that people lose faith in the general fairness of the system and so don't save and invest. And without savings and investment (not just monetary, gaining education is a form of saving and investment for example) the economy will never lift off.

The Global Corruption Barometer for the Asia Pacific Region was released by Transparency International (TI) - an anti-corruption global civil society organisation, at the stroke of one minute past midnight on 7 March in Berlin.

Approximately 90 crore people, or just over one in four, across 16 countries in Asia Pacific, including some of its biggest economies like India and China, are estimated to have paid a bribe to access public services.

For its report - People and Corruption: Asia Pacific, part of the Global Corruption Barometer series, TI spoke to nearly 22,000 people in these countries about their recent experiences with corruption.

Vietnam second
India was followed closely by Vietnam where around two thirds (65 per cent) had paid a bribe when accessing public services.

In mainland China, 73 per cent of the respondents felt that the level of corruption had worsened. This was the highest of any country surveyed.

In total, 38 per cent of the poorest people surveyed said they paid a bribe either for access to a service or for quicker delivery. In some countries like India, Pakistan and Thailand, it was the poorer section who had to bear the brunt of corruption and pay a bribe.

Nearly 73 per cent of those who paid a bribe in India were from the poorer section of society; in Pakistan and Thailand this percentage was 64 per cent and 46 per cent respectively.

A converse trend was found in some countries - such as China, where the richer sections were more likely to pay a bribe - perhaps to get a quicker or better quality of service.

'Time to act'
"Governments must do more to deliver on their anti-corruption commitments. It's time to stop talking and act. Millions of people are forced to pay bribes for public services and it is the poor who are most vulnerable," said Jose Ugaz, chair of Transparency International.

Many states in India already have in place the 'Right to Public Services Act' cutting across a number of services, which require that services be delivered within a stipulated time period, but the survey results point out the need for further improvement.

In India, respondents reported the highest bribery incidence in procuring government healthcare services and even identification related documents. Nearly 59 per cent of the respondents had paid a bribe for such services. Bribes paid for education were next on the list with 58 per cent having reported doing so.

Speaking to The Times of India, Ilham Mohamed, regional coordinator, South Asia & Mongolia at TI, said, "At the state level, anti-corruption policies must be focussed on catering for the poor. Uniform best practices for state level lokayuktas must be agreed upon and any overlaps with other law enforcement agencies must be resolved at the earliest."

She adds that at the national level, "India needs to urgently align its foreign bribery laws with its UNCAC (United Nations Convention against Corruption) obligations. Signing OECD anti-bribery commission is key in this process. The legal infrastructure for public procurement in India falls under the remit of the General Financial Rules.

''TI recommends that a national procurement law that incorporates international best practices including debarment, appeal processes and a review processes be enacted. This will substantially reduce fraud in public contracting which will in turn affect the quality of public service delivery. For grand corruption, a key step would be to set up effective enabling regulations and institutions for the Lok Pal."

Across the region, people thought that reporting corruption (22 per cent) followed by refusing to pay bribes (21 per cent) were most effective.