Government all set to crack down on super-rich tax dodgers

Prime Minister Narendra Modi has vowed to crack down on India's endemic tax avoidance, which is more prevalent among the super rich, as part of the government's efforts to bridge the widening gap between the haves and the have-nots. 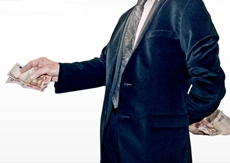 Crores of rupees in unpaid taxes deprive the Indian government of revenues that could be spent on changing lives of the teeming millions in the country's rural hinterlands.

Official figures published last month, for the first time since 2000, showed that only six persons with income over Rs50 crore ($7.4 million) filed returns in 2012-13 while the number of such top earners stood over 2,000.

Figures published last month in the Credit Suisse Global Wealth Report (also called the Forbes list) had found 84 billionaires in India, while the number of ultra-wealthy Indians whose net worth exceeded $50 million, are estimated at 2,100.

The lavish parties and high-end living by non-payers in India, however, belie tax compliance. The display of wealth, including luxury cars, multi-million dollar weddings, drawing thousands of guests are in contrast to tax compliance.

The Income Tax Act clearly states that if a taxpayer does not disclose part or whole of his income, or provides inaccurate details of his income in his returns, he can be penalised. The penalty can be a minimum of 100 per cent to a maximum of 300 per cent of the tax unpaid.

Reports have point to the constant changes in income classification that impose excessive burden even on honest taxpayers. A recent court ruling has pointed out that penalty can't be imposed on income whose classification has been changed during the course of assessment.

It is a fact that millions of people in the higher income bracket are not paying the correct amount of taxes. But there are limitations to enforcement action because of both loopholes in tax administration and the uncertainty of rules that govern taxation in the country.

Tax-evaders are also shroud enough not to display such wealth even as they practice all sorts of money-laundering through all available sources.

The one common thread across all levels of India's taxpayers is that their numbers are startlingly few, with only around 2.5 per cent of the 1.2 billion population filing returns. The numbers taper off at the upper income strata.

At least 500 Indians, including Bollywood celebrities, business tycoons and an ex-cricketer were named in the recent Panama Papers investigation as using tax havens.