India has potential to grow at 8%: Lord Meghnad Desai

India has a lot of potential and can grow at 8 per cent if it gets the right policies and strategies in place, eminent economist Lord Meghnad Desai said on Tuesday. 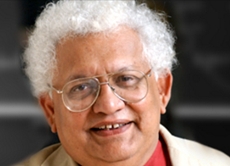 ''Growth of Indian economy will continue. I think a growth rate of 7-7.5 per cent is a default rate, but the real challenge is to get 9-10 per cent, which India is capable of but requires hard work. With right policies, it can easily grow at 8 per cent,'' the Indian-origin British peer said in London.

The finance ministry last week said the economy would grow in the vicinity of 7.5 per cent this fiscal, down from the earlier projection of over 8 per cent. In the first half of 2015-16, it expanded at 7.2 per cent.

The professor emeritus at the prestigious London School of Economics (LSE) also drew attention to issues like failed land reforms and uncertainty over labour reforms.

He said the much-awaited GST may not be implemented from next April, but it looks like the landmark indirect tax reform will eventually go through.

Desai said the domestic policy is restricted by the external sector, which is very dynamic. Therefore, the country has to be smarter and policymakers need to factor in the importance of external shocks which affect capital flows.

He said in terms of capital mobility, India has partially liberalised its capital account, and this is a good thing because the country is in great need of foreign capital.

However, India also needs to care about the type of capital inflow. Currently, it appears to prefer foreign institutional investments over foreign direct investment, even though the former flows are more unstable, he added.

One of the causes of recent surge in capital inflows is that Western countries have not been able to increase demand for investments even at near-zero interest rates. But to continue to attract capital, India has to minimise exchange rate risks, he said.

India will have to judiciously manage its exchange rate because corporates have borrowed abroad in large amounts, and there is a danger that a sudden drop in rupee value will have adverse valuation implications for this debt, he said.

The global economy is fairly open and this gives India several opportunities to attract investment. However, India is learning to be an open economy, and a complete integration of domestic policy with global regime is still awaited, he added.