TDP's Nara Lokesh gets NRIs in US to adopt 2,400 Andhra villages 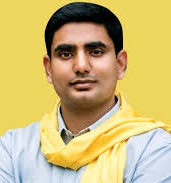 Nara Lokesh, coordinator of TDP Workers Welfare Fund, has secured commitments from non-resident Indians in the United States to adopt more than 2,400 villages in C for development.

During a 10-day tour of the US, Lokesh visited seven cities and interacted with over 5,000 NRIs who have come forward to adopt more than 2,400 villages under the 'Smart Village-Smart Ward Programme' of Andhra Pradesh government.

During his visit that ended on 12 May, Lokesh also visited US President Barack Obama, Louisiana and Texas Governors Bobby Jindal and Greg Abbott among other prominent personalities in the US, according to a TDP press release issued on Thursday.

Lokesh said industrialists were enthusiastic to invest in Andhra Pradesh and that the governors of Louisiana and Texas have promised to send their delegations to AP soon, according to L.V.S.R.K. Prasad, chairman of the media committee of the TDP.

Indian-Americans have been impressed by the idea of 'Smart Village-Smart Ward', and several of them have agreed to share in developing more than 2,417 villages in AP, Lokesh said.

He met US Assistant Secretary of Commerce Arun Kumar and discussed the smart city project in particular that of Visakhapatnam, the media statement said.

"The day is not far when AP will become a formidable force that will set new precedents in the nation," Lokesh said while addressing the NRI Telugu community.

"I explained the immense potential our state presented as an investment destination and requested his support in making AP a manufacturing hub," he said.

'Smart Village-Smart Ward' programme, the brain child of Naidu, aims at people's participation in every village for its comprehensive development.

Lokesh will arrive in Hyderabad on Friday.