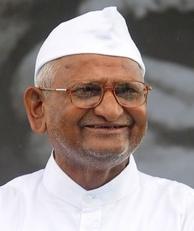 Anti-corruption activist Anna Hazare today launched his two-day protest against the land acquisition ordinance at Jantar Mantar, on the day the budget session of parliament got under way.

Hazare is holding the protest to demand the withdrawal of the anti-farmer amendments to the Land Acquisition Act, 2013.

Threatening to launch another movement at the Ramlila Maidan after four months, he called upon the people of India to help him take his movement forward.

"When I was 25 years old, I decided that I will commit my life to the welfare of the country and its society. I don't fear death. That's why I fight such goondas (thugs)," he said.

"Around 5,000-6,000 farmers have gone on the padyatra and will reach here. More people will reach this place. This andolan (agitation) will grow," said Anna. "We request the government to withdraw this law and bring back as well make additions to the 2013 law.''

He added, "Small farmers and women in villages don't know what this law is. We have to start a padyatra (march) in every village and district to enlighten them," he said. "And after four months, we will launch a protest at Ramlila Maidan.

He asked the Modi government what was the difference between it and the previous Manmohan Singh-led government.

"The government is now taking decisions on the basis of its own whims. What is the difference between the Congress government and you (NDA) then? Today, you are doing the same things they did," he said.

"The sevaks (servants) who had chosen their maliks (masters) will now have their lands snatched because of their maliks. Isn't this injustice?" Anna said.

Speaking about why he was not going to the courts instead of staging a protest, Anna Hazare said, "If there was any injustice against the farmers, there was earlier a provision which entitled one to go to the courts. Now, they've removed this provision. That's why I have to protest."

Anna also said that this Ordinance had removed a provision on irrigated land, which was present in the 2013 law. "The law earlier stated that irrigated land could not be taken from the farmers. Now, the government will take over irrigated land and give to industrialists," he said.