Monsoon in central and northwestern India, which is currently reeling under severe heat, is likely to pick up by 15 July, according to the meteorological department. 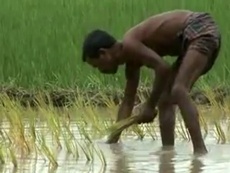 The generally weak rainfall across most parts of the country since the start of the monsoon season in the first week of June, has affected agricultural operations and revival of monsoon is crucial to agricultural production.

IMD director B P Yadav blamed the weak monsoon to the absence of clouds and increased humidity in the Bay of Bengal area, which is expected to remain till 14 July.

Summer sowing has been delayed as seasonal showers trailed a benchmark average by 43 per cent as of Thursday and water reserve levels dropped from a 10-year average for the first time this year.

It may be noted that rainfall so far this season has been lower than even 2009 when the country witnessed the worst drought in 37 years with a deficit of 36 per cent.

The drought had resulted in a 6 per cent fall in food production in 2009-10 and pushed up food inflation by 15.27 per cent and drove down farm sector growth to a paltry 0.8 per cent, compared with the overall economic growth of 8.6 per cent.

With only 15 per cent of the country receiving normal rainfall and 52 per cent and 33 per cent of the areas receiving deficit and scanty rainfall, respectively, private forecaster Skymet had last month warned of a 60 per cent probability of a drought year.

IMD defines rainfall between 96-104 per cent of the long-period average as normal and below 90 per cent as scanty rainfall.

IMD, however, said on Friday that ''conditions are favourable for further advance of the southwest monsoon into some more parts of Gujarat during next two days''. Gujarat, Maharashtra and parts of Madhya Pradesh that are part of the central region have received scanty monsoon rainfall till now.

According to the Met department, heavy rainfall would occur at many places over Chhattisgarh, West Bengal, Odisha, Jharkhand, Assam and Meghalaya, Telangana and coastal Karnataka during the next two days. However, northern regions are unlikely to get any monsoon rains over the next few days, the IMD said.

IMD had, in June, forecast that monsoon rains this year would be 93 per cent of the LPA, with a 33 per cent probability of deficient monsoon rains and 70 per cent chances of a recurrence of an El Nino system. It had forecast the worst deficit in rainfall (15 per cent) for the northwestern region this year.