The UPA government today pushed through the Lok Sabha a path-breaking Land Acquisition Bill, which seeks to provide just and fair compensation to farmers while ensuring that no land is acquired forcibly. 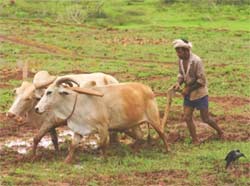 A depleted Lok Sabha today passed the bill with an overwhelming majority of 216 votes in favour and 19 against.

Members of the Left parties, AIADMK and the BJD staged a walkout and Trinamool Congress voted against the bill.

While opposition parties have sought more sops for farmers to part with their land, industry bodies like the CII said the bill will push up land acquisition cost by over three times.

The bill has been hanging fire with 381 amendments moved to the bill, of which 166 were official ones. Some of the opposition amendments were withdrawn while others were defeated during voting.

Congress president Sonia Gandhi and home minister and leader of the house Sushilkumar Shinde did not participate in the voting as they left when amendments were being moved.

"We believe that the land bill strikes a fair balance," finance minister P Chidambaram told reporters. "Land has to be made available, but while land is being either purchased or acquired to make land available for industry, we must also keep in mind that those who are deprived of land are in most cases deprived of the only asset they have."

Although the land bill claims to have several merits and is considered as a vote winner for the United Progressive Alliance (UPA), many, including from alliance leader Congress party, are sceptical about the economic benefits of the land bill.

While the bill aims to benefit farmers, it does not offer any sops to industry, rather it would make it difficult for industry to acquire land; nor does the government benefit from it.