The Reserve Bank of India today cut its repo rate by an unexpectedly sharp 50 basis points or 0.5 per cent, bringing the repo rate down to 8 per cent, even as it warned in its mid-month policy review that the scope for further cuts was limited. It left the cash reserve ratio (CRR) unchanged at 4.75 per cent. 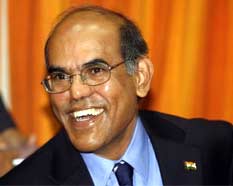 Earlier on 9 March, in a surprise move a week ahead of Union Budget 2012-13, RBI had reduced the CRR by 75 basis points to 4.75 per cent from 5.5 per cent, effective the next day, in a bid to further ease liquidity conditions in the banking system (See: RBI cuts banks' CRR by 75 bps to 4.75 per cent). It kept its policy rates unchanged in its mid-quarter monetary policy review a day ahead of the Budget.

Most economists had expected a cut of 25 bps cut in today's policy review. The RBI move is likely to make home and car loans cheaper.

While cutting the repo rate for the first time in three years to boost sagging industrial production, the RBI review warned that the current account deficit, which widened to 4.3 per cent of GDP in the December quarter, is "unsustainable" and will be difficult to finance given projections of lower capital flows to emerging markets in 2012.

India's industrial output grew in February by a lower-than-expected 4.1 per cent after expanding by just 1.1 per cent in January, data released last week showed.

The RBI had hiked interest rates 13 times since March 2010, undertaking the most aggressive monetary policy tightening drive of all major economies, and it has kept rates on hold since late last year.